Jurgen Klopp is no stranger to repurposing his players into new on-field roles.

At both Borussia Dortmund and at Liverpool, the German has thought outside the box and redeployed players in new positions.

Roberto Firmino is perhaps the most example. The Brazilian arrived at Anfield from Hoffenheim as an attacking midfielder, but — almost instantly — Klopp decided, with much subsequent justification, that his talents were better served as the team’s main, central forward.

Similarly, Georginio Wijnaldum — who swapped Newcastle for the Reds in the summer of 2016 — was a second striker and or attacking midfielder where he signed for the club but was thereafter moulded into a shuttling, defensively diligent midfield safety valve.

Another player who signed for Liverpool and was instantly converted into a new position was Alex Oxlade Chamberlain. The England international joined the Reds on deadline day in the summer of 2017 from Arsenal. During his time in North London, he — for the vast majority of his time in red and white — played on the flanks; be it as a winger or, latterly, as a wing-back as Arsene Wenger pivoted to a back three formation.

After initial teething problems in his new position, Oxlade Chamberlain took English and European Football by storm in his new, central midfield role. The Southampton academy graduates form was exemplary in the heart of the midfield, an area he said that Liverpool legend Steven Gerrard inspired him to play.

Sadly, though, after playing a huge role in both legs of the Champions League quarter-final victory over Manchester City — where his bloodyminded directness and dynamism saw him notch a goal in the first fixture — the 27-year-old sustained a knee ligament injury versus Roma in the subsequent semi-final that kept him sidelined for over a year.

In the interim, the Reds strengthened the midfield with players of the calibre of Fabinho, Naby Keita, and Thiago, while Curtis Jones has emerged from the academy as a live candidate for a spot in the engine room. This increased, quality competition for places has meant that Oxlade Chamberlain’s playing time has been sporadic since returning from his lengthy absence, a fact not helped by the knee injury sustained this season that kept him out from August to December.

And now, after relatively few performances — most of which have been below the standard’s he previously set — that have been marked by a clear lack of rhythm, many have questioned whether the Englishman has a future on Merseyside.

A move that could pave a route for a future at Anfield for Oxlade Chamberlain could be another patented Klopp positional rejiggering and a stint at right-back.

While Trent Alexander Arnold is the undisputed number one — possibly even the world’s foremost full-back, even if covid, injury and the general flatness of those around him has prevented him from reaching the world-class standard’s he set over the course of the last three season’s — there is a need for a quality back-up for the number 66.

Neco Williams is Alexander Arnold’s nominal back up and — contrary to the social media hounding he has received in the past — a decent player in his own right. Still, at 19-years-old he has a lot of rough edges in his game to smooth out. It also has to be taken into account that the Wales international has only recently started to learn the full-back role after spending his formative years as a winger.

It seems doubtful that Williams can learn the ropes at Anfield while playing so infrequently — the academy graduate has only made seven appearances this season — and the best course of action would be a loan away where he can polish his game away from the intimidating spotlight cast upon him and the limited game time he’ll be afforded at Liverpool.

Into this void could step Oxlade Chamberlain. Having previously played as a wing-back — an area that isn’t too far distinct from Liverpool’s ambitious use of their full-backs — the concept wouldn’t be terribly alien to the former Arsenal winger. He has all the constituent parts of an excellent full-back; physicality, pace, with the ability to both cross and dribbles the ball to a high level.

As we can see from the below passing map, sourced from TeamTwenty3Sport, even as a central midfielder the 35 times capped England international has a tendency to operate on the right-hand side of the pitch and this adds meat to the bone that he could well be repurposed as an effective right-back. 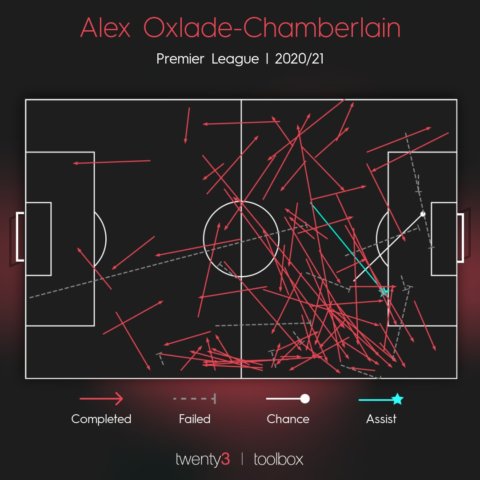 Any defensive issues are worth discussing, but the dominance the English champions usually enjoy in both possession and territory means the volume of defending their full-backs have to do is comparatively slim and that — to borrow an old cliche — attack is the best form of defence.

Utilising the England international here would also give the Reds a more orthodox option to use. Alexander Arnold plays the right full-back role like no one since Dani Alves and a lot of his attacking play takes place more towards the central band of the pitch and in the wide half-spaces. For all intents and purposes, the 22-year-old is almost an additional midfielder.

But with Oxlade Chamberlain at the full-back helm, Liverpool would have a natural width to their right-hand side and the ability to attack the byline and hurt teams in another manner. The consequence of this would the creation of more space further infield for the likes of Thiago to exploit.

Whether the Reds’ number 15 has a long term future at the club is most certainly up for debate, but with money sparse and needed elsewhere in the squad, Liverpool could potentially upgrade their back up right back role without spending a penny.