The 433 formation has served Liverpool well over the years.

A feature of this shape has been the use of Sadio Mane and Mohamed Salah — the wide forwards that spearhead the Reds’ attack — on their ”wrong” sides, the left-footed Salah on the right, and the right-footed Mane on the left.

It has been tactically trendy to use your wide players cutting in from the opposite flank to their strong foot in recent years, with Arjen Robben and Franck Ribery and Gareth Bale and Cristiano Ronaldo at FC Bayern and Real Madrid respectively good examples.

But Jurgen Klopp’s next tactical port of call could well see him play a winger on their natural side in order to give width and create space infield, instead of using the player as an additional forward.

The Reds’ have tinkered with new formations lately, as shown by this excellent graphic by @topimpacat on Twitter. Depending on the phase of play in the recent win away to Sheffield United, Liverpool played variations of 253, 442, 433, and 424.

Key to this tactical flexibility was Trent Alexander Arnold. The 22-year-old was, depending on the phase of play, a right-sided centre half, a winger, a right wing-back and an auxiliary central midfielder. 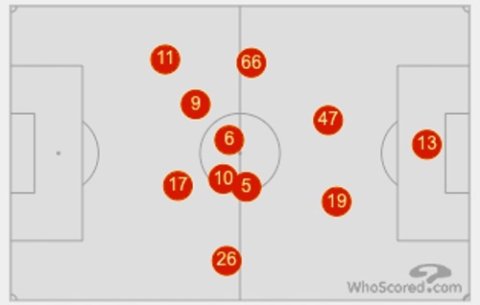 Looking at the Reds’ average position map — which was sourced from WhoScored.com — Alexander Arnold was far more central than his full-back c0lleague, Andy Robertson.

With a technical ability and vision not seen in a full-back since Dani Alves, the Liverpool academy graduate in a special player and the Reds’ need to maximize his talents going forward in the years to come.

Borrowing a play from Pep Guardiola and Manchester City could prove a useful mechanism to allow Alexander Arnold to continue to thrive.

Throughout most of the course of his time in England, Guardiola has used his wide players on their “natural” sides in order to stretch the pitch and create space further infield for his midfielders — or his full-backs, who tend to play closer to the centre of the pitch on the ball — to operate in. Raheem Sterling and Leroy Sane have excelled playing on the right-wing and left-wing for City, going against the grain of modern tactical convention.

Applied to Liverpool, this could mean a staggered and asymmetrical tactical shape with Robertson holding the width on the left and a right-winger doing the same on the right, with the template seen in the Sheffield United game used as the basis.

Mohamed Salah was given that responsibility in the 2-0 win away to the Blades and it didn’t necessarily suit the Egyptian, whose talents are better served in a central role, closer to the goal.

In the years to come, however, Salah could be repurposed as an orthodox number 9 with a “natural” winger holding the width on the right-flank. Liverpool’s approach in recent years has been to have two forwards — Salah and Mane — and a facilitator in the form of Roberto Firmino.

But with this change, they could keep the “two forwards and one facilitator” process but with the responsibility of creativity switching from Firmino to the midfield — in a manner similar to Manchester City — or to the right-sided attacking player.

Hypothetically, Mane could stay in his current inside forward role with Robertson providing the wide presence that allows the Senegalese to operate closer to the goal.

Then, Salah could become the team’s main focal point, as we saw to good effect in parts of the 2018/2019 season when the number 11 lead the line and Xherdan Shaqiri played as the right-winger, performing as an additional playmaker.

On the other side, Alexander Arnold could play in the half-spaces and move more centrally without the team becoming too narrow with the right-winger stretching the pitch on that flank.

Given this freedom and tactical latitude against Sheffield United, the England international thrived. With 123 touches, Alexander Arnold saw the ball the most of any player on the pitch, while creating three chances(the most on the pitch) and having three shots(the second most after Curtis Jones)

Coming from deeper and starting out wide, the Liverpudlian can exploit the half-spaces from a unique starting point, while also offering the ability to attacking the byline like an orthodox winger/full back; we saw this in the build-up to Jones’ goal.

Teams can opt to mark the full-back out of the game, but this, in turn, leaves more spaces for others in the central band of the pitch and with a natural, chalk on the boots winger on the right side, even more space would be created.

The alternative is not to not mark Alexander Arnold, but — as we’ve seen umpteen times in his Anfield career — you give the 20-year-old, with his ranging passing game, the space at your peril.

Against Sheffield United, we may have seen the image of Liverpool’s tactical future and in that game and indeed in the future the key will be Alexander Arnold.