Whenever Liverpool lose, there’s always a bit of a scramble for someone to come up with a definitive answer as to why it happened. It doesn’t necessarily have to be the right answer, just the first one.

After all, it’s easier to process and accept if there’s only one issue. We’ve all heard about how the high defensive line is a problem. The press isn’t the same either, with the Reds being a little more standoffish than usual. There have also been injuries, a lot of them.  Against Real Madrid, if we’re being completely honest, all three of these reasons played a part in the loss. However, people have cherry-picked whatever one best suited their agenda.

The truth is, though, Jurgen Klopp was tactically outclassed by Zinedine Zidane. It isn’t really something you want to accept as a Liverpool fan but the Frenchman did a number on his German counterpart and it was one of the key reasons the Reds lost. Yes, individual mistakes hurt on the night and, yes, these might not have occurred had everyone been fit.

It was a subtle tweak by the LaLiga side, but an important one.

In the early stages, they lined up as you’d expect with Casemiro operating as the deepest midfielder. Ahead of him was Luka Modric and Toni Kroos.

With Naby Keita in the team, the plan was to press high. In the early stages of the game, that was tactic was clear. 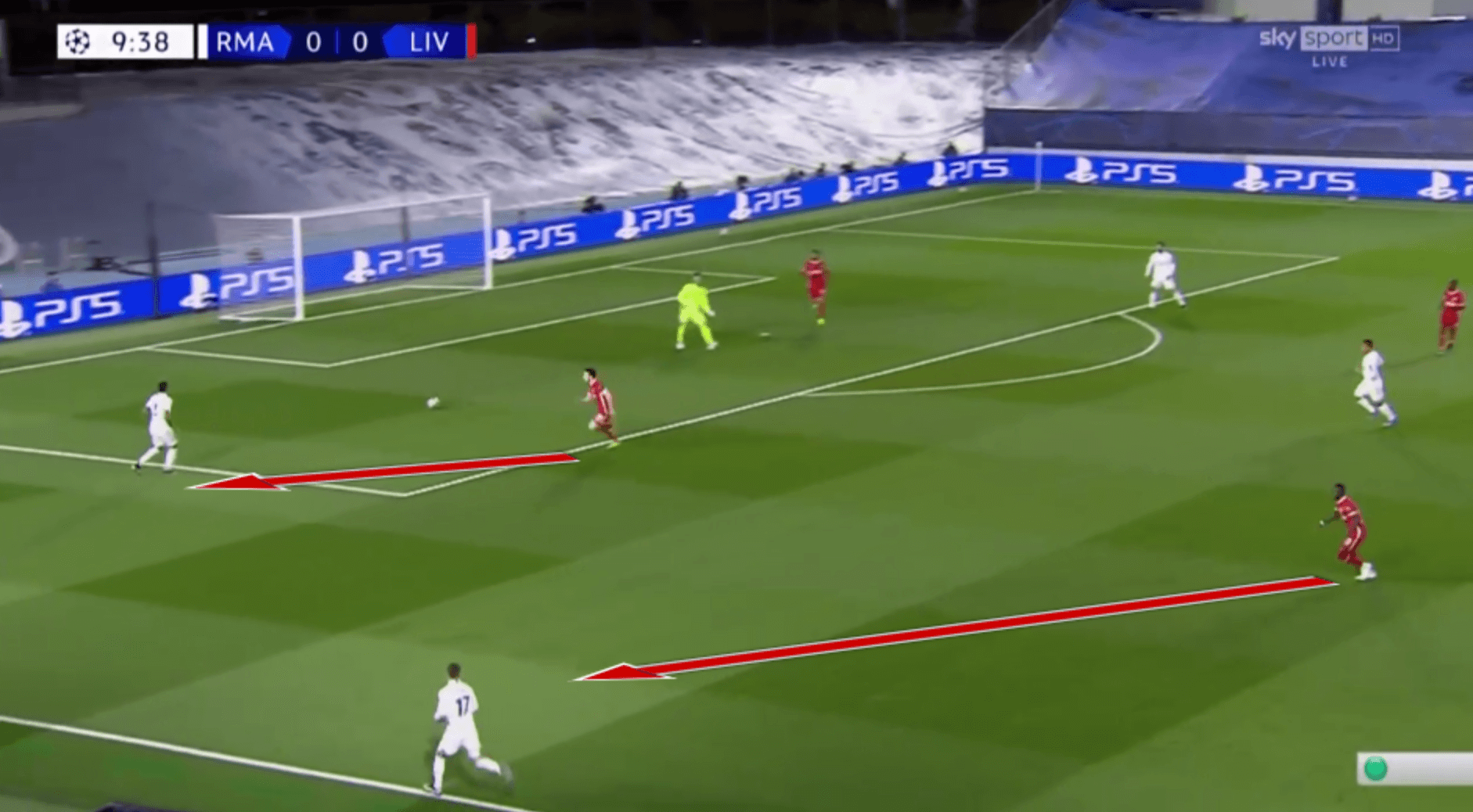 The above is a good example of this. Mohamed Salah pressed the keeper and blocked off a pass to the left. Diogo Jota then looks to shut down the centre of the pitch and force Eder Militao to either go long or to play a pass to the right-back. Sadio Mane is on the move to pin Lucas Vasquez against the touchline and then centrally you have Keita, the right-sided midfielder, keeping tabs on Nacho. 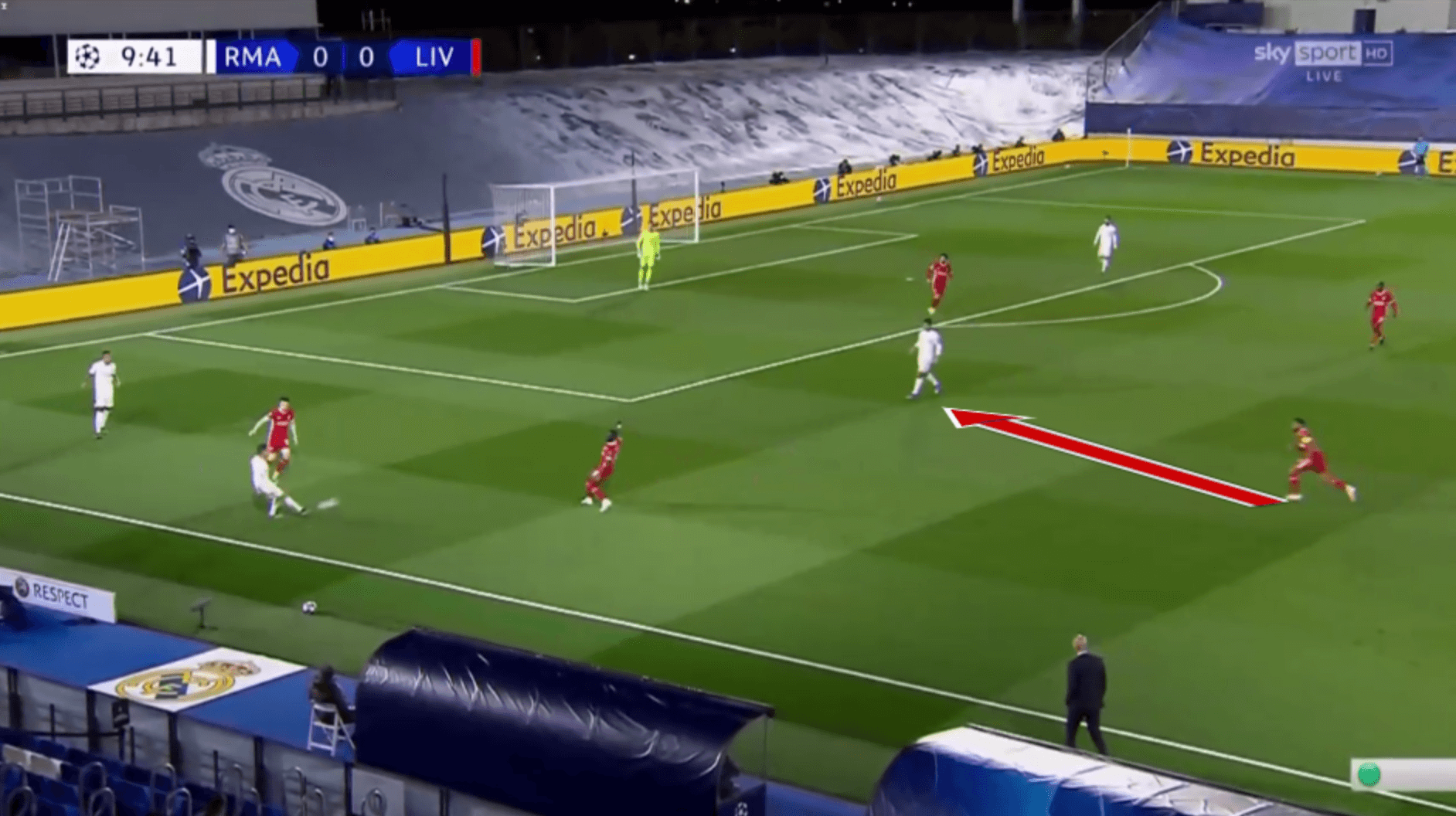 If Gini Wijaldum is a little quicker to close down Casemiro, Real Madrid don’t play their way out of this situation. I’m not entirely sure why he’s on his heels, but this definitely helps Zidane’s side play out of danger. 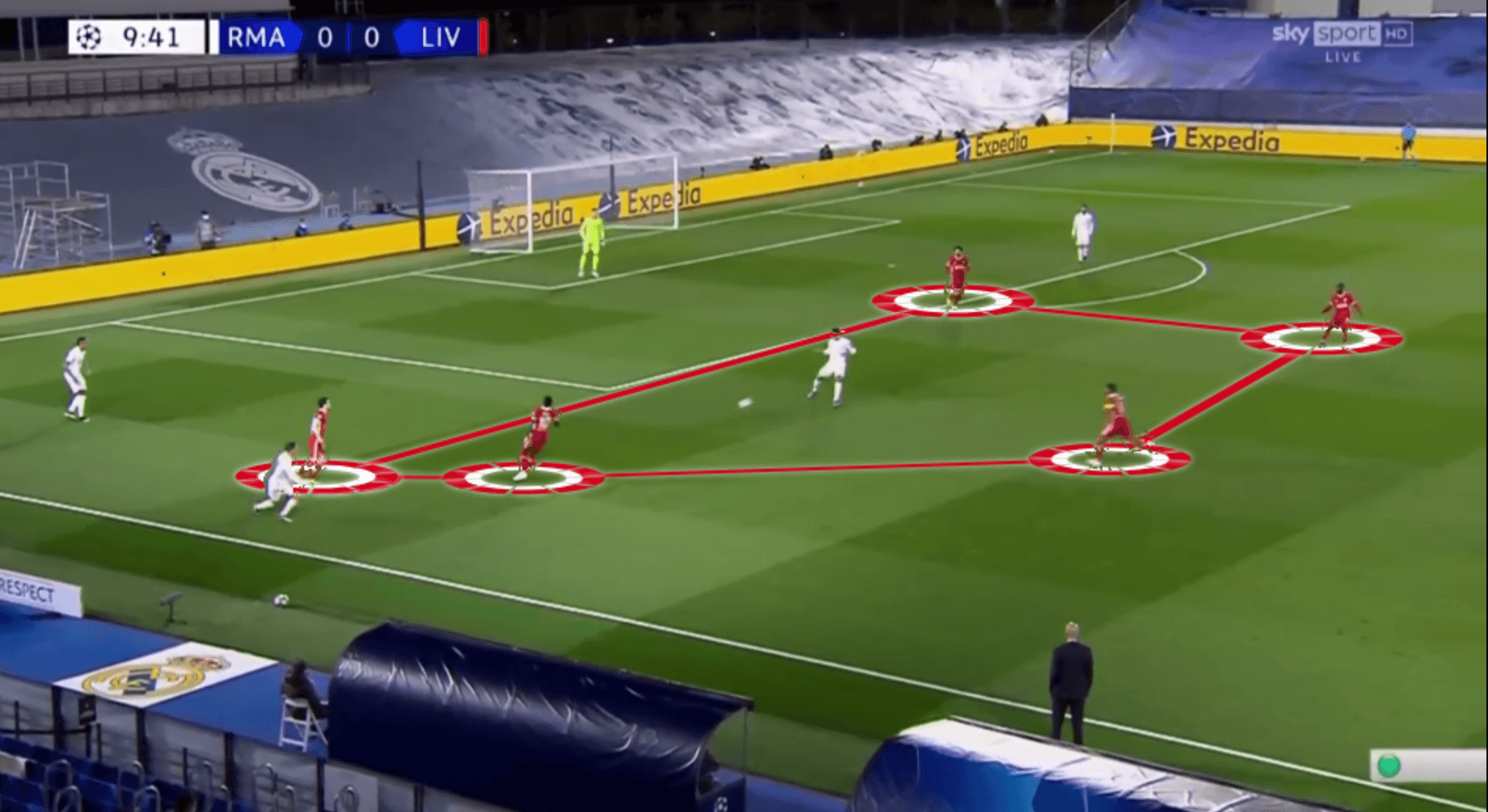 Obviously, this particular trap failed, but you can understand the logic behind it. Pin the full-back to the sideline, block off passes back to centre-backs and keeper. Force them to go long or play into the trap set by the Reds and have the midfield pounce on Casemiro. Win the ball back in this scenario and Liverpool have five players in the final third against four in white.

Klopp’s men almost got it right on a few occasions early on.  All it takes is for there to be a turnover in one of these situations and the Reds have a fairly decent opportunity to carve out a chance.

Zidane spotted this around the 12th minute and proceeded to change how Madrid would build up.

Instead of having Kroos and Modric as a two ahead of Casemiro, he had the former drop to play alongside the Brazilian. Not just that, he allowed the Germany international the freedom to drift to the right.

This confused things. If he dropped into the left-sided centre-back role, Keita can still press him. Even if he was playing almost as a centre-back in the middle of the defence, the Liverpool No.8 could’ve still engaged. As soon as he drops to the right, he’s a free man as Wijnaldum wasn’t as aggressive with his press. 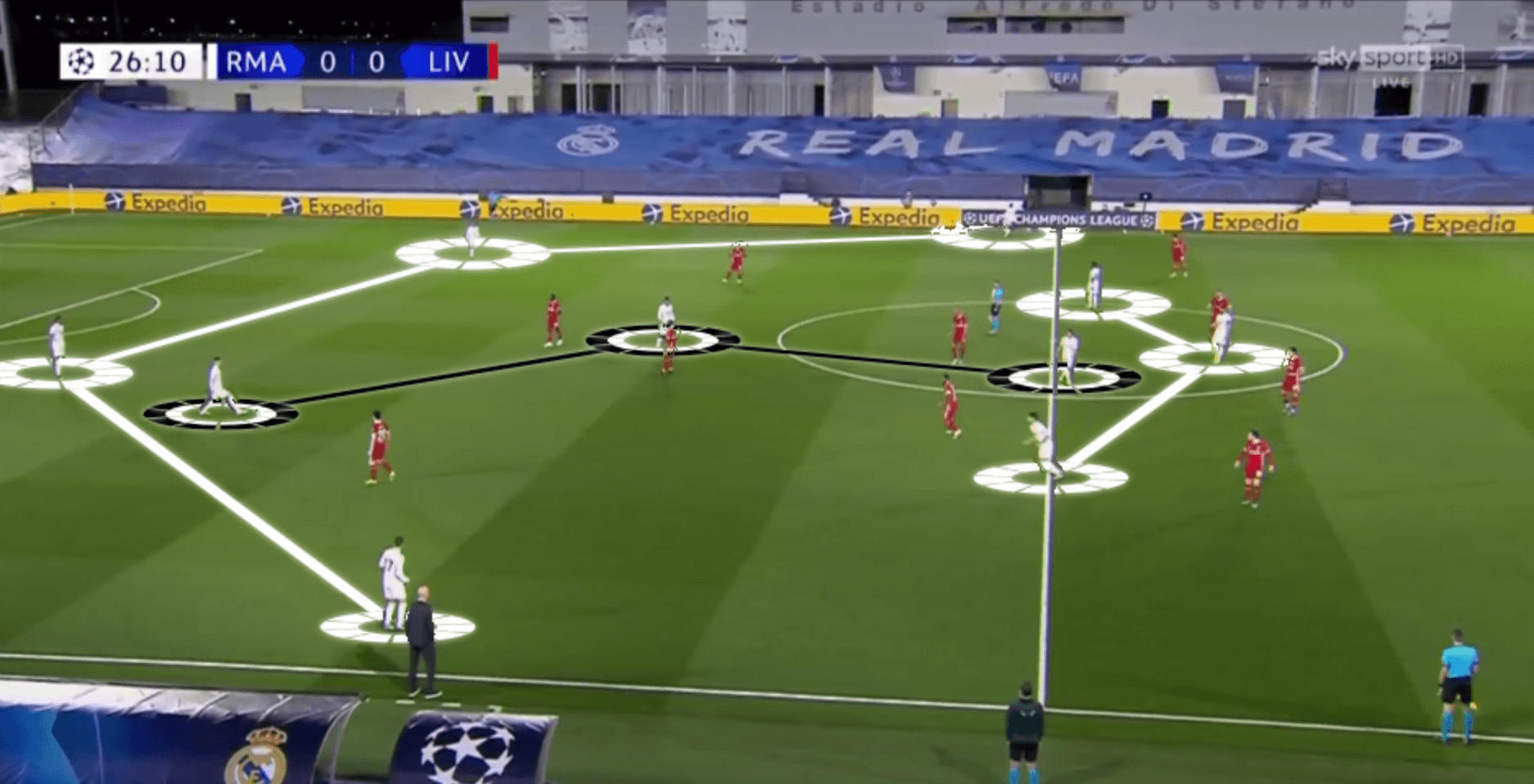 This caused a lot of trouble. There’s an overload on the Madrid left with Trent Alexander-Arnold up against Ferland Mendy and Vinicius. Luka Modric has pushed up to occupy Fabinho and the centre-backs while Marco Asensio is in a position to keep Wijnaldum and Andrew Robertson busy.

Jota could press Kroos and block the pass off to Vasquez but the German can still easily play the ball to Militao or to the keeper. Mane perhaps should press the Real Madrid No.8 but right centre-back area is usually left for the man playing on the left of the attack. In this instance, Mane is the centre-forward so he’s blocking off the pass to the defensive midfielder (Casemiro).

Keita, having initially pressed Kroos when he’d picked the ball up on the Madrid left, backs off and looks to get back over to the right because nobody else is covering for him there.

Zidane’s decision to tweak where Kroos was operating seemed to bamboozle Liverpool and scupper the press. You can’t have Keita, the right sided centre-midfielder, pressing the zone usually filled by the opponent’s right-sided centre-back. Not unless you switch him and Wijnaldum.

The Reds didn’t react quick enough and Real Madrid capitalised. The first goal was a system issue, not an individual one.