Let’s face it, Roberto Firmino — at least in front of goal — has regressed as a player over the course of the last two seasons.

From a record high 0f 15 Premier League goals in the 2017/2018 season, the Brazilian’s numbers have steadily dropped and he finds himself on eight league goals this season, the same figure he registered last term.

Of course, anyone familiar with the Brazilian internationals game knows that his on-field role is about much more than goals. With his tactical intelligence and supreme appetite for defensive work, Firmino has been the bedrock that Jurgen Klopp has built his successful high pressing style upon.

But in the past — especially in the 2017/2018 season — the former Hoffenheim attacker combined the ceaseless industry with production in front of goal, be it by scoring or assisting, and his relative lack of goals now feels like a good gauge to measure his performance levels.

With all that being said, Liverpool badly missed Firmino in their 3-1 Champions League quarter-final defeat away to Real Madrid on Tuesday last.

In the Brazilian’s stead started Diogo Jota, the free-scoring summer signing from Wolves. With his pace, direct approach and dead-eyed finishing ability, the Portuguese international has quickly established himself as a favourite of the Anfield faithful.

The 24-year-old may trump Firmino in many areas of the game but his lack of synergy with Mohamed Salah and Sadio Mane — two players that the 29-year-old has facilitated with his selflessness and intelligence of movement over the course of the last four years — was evident.

The trio, all quick and with a tendency to play off the shoulder of the last defender, didn’t mesh together well against the defending Spanish champions. No one seemed capable — or perhaps minded to — to drop deep and offer themselves as a passing option to the midfield.

The Reds struggled with ball retention in the first half and went into the changing room at the interval without attempting a single shot. The gap between the midfield and the attack — an area where Firmino, who is ostensibly a number 9 but much closer to an attacking midfield, usually operates — was too large and the visitors struggled to knit together moves.

Off the ball, and this was perhaps the area where Liverpool were so uncharacteristically meek and passive, Klopp would have been so disappointed the lack of pressure — a non-negotiable trait for any of his players — against the ball.

Toni Kroos was allowed to pull the midfield strings unharassed and it was through the German’s vision and long passing that the Spaniard’s opened the scoring. The former FC Bayern playmaker fired a pass flush onto the foot of Vinicius Junior and the Brazilian — whose run saw him dart between Nat Phillips and Trent Alexander Arnold — finished with aplomb after a sublime first touch.

As we can see in the image below, he had zero pressure on him and with a player of the 2014 World Cup winner being given so much time, the results are inevitable. 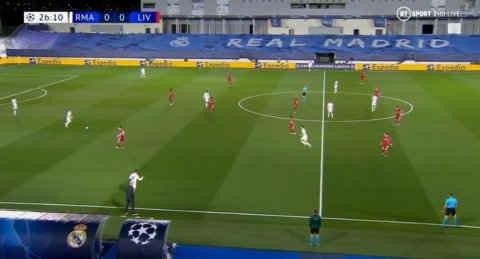 What was most concerning was that minutes beforehand, Kroos tried a similar pass and found Vinicius Junior but the youngster’s cross into the box didn’t lead to a goal. The Reds were given ample warning and, despite this, sat on their hands and were meted out deserved punishment.

The German played an integral part in Madrid’s second goal, when his pass into the channel saw Trent Alexander Arnold miscue a header that left Alisson in no man’s land. From the ensuing confusion, Marco Asensio accepted the gift and tapped into an empty net.

Alexander Arnold — a needlessly hot topic for debate at the moment, regarding being dropped from the England squad — was directly at fault for the goal, but the Reds failed to stop the move at the source.

Had Firmino been playing, it stands to reason to assume that Kroos — and indeed Luka Modric — wouldn’t have been given such an easy ride and they would have been pressurised and pressed by the Brazilian and Madrid — whose gameplan was to play high and long over Liverpool’s backline — wouldn’t have had so much joy.

The Reds’ number 9 isn’t the player of old, but Klopp made a mistake by leaving him out when other players — most notably Sadio Mane — weren’t in the form — or weren’t tactically suitable to apply the link between midfield and attack — to justify selection over the Brazil international.