Following on from an impressive performance in the Reds’ 4-2 win over Manchester United at Old Trafford a few days previously, the Spanish international provided a creative spark and dogged defensive diligence that the away team needed in a tough encounter with the Baggies.

Completing 91% of his passes, accurately spraying five out of eight of his attempted long balls, and creating five chances, the former Barcelona midfield linchpin brought all of his trademark ability on the ball. Off the ball, though, he also excelled. The number six won 12/14 ground duels and — despite not being towering in stature — came out the winner in three out of four aerial duels, especially impressive given the fact he was playing against Sam Allardyce’s team of giants.

If it wasn’t for the fact that Alisson — yes, the goalkeeper! — scored the winning goal, then the Spaniard would have been a shoo-in for the man of the match award.

Another one of the Reds’ standout players — along with Mohamed Salah — was Trent Alexander Arnold and the full-back continued his fine vein of form. The 22-year-old swung in the corner that lead to Alisson’s goal, his fourth assist in seven games since Gareth Southgate inexplicably excluded him from the England squad in March. The Liverpool academy graduate has also scored a winning goal, at home to Aston Villa, in that time.

The England international passed eighteen times to the former FC Bayern playmaker and Thiago returned the favour and passed sixteen times to Alexander Arnold. The only passing route made with more frequency was Andrew Robertson to Sadio Mane, a pairing whose partnership has been four years in the making.

Having both players — two of the team’s nominal playmakers — in close proximity to one another, alongside Salah who operates on the right side of the field, creates space elsewhere on the pitch. With his wondrous ability to cross and pass from even the most difficult of angles, teams are wary of giving Alexander Arnold free reign to flex his considerable technical muscles.

Likewise, Thiago’s ability to take the ball in even the most compressed parts of the field and to progress the play means that Liverpool can open up spaces even against the deepest sitting, defensively drilled, lock block teams. Teams will therefore look to stop the two quarterbacks from conducting attacks and, logically, this will mean that gaps will appear elsewhere on the pitch.

You could see the threat the dual playmakers possess against Manchester United in the Reds’ recent 4-2 win.

In the screengrab below we can that Alexander Arnold intercepts Luke Shaw’s pass, the away team’s action springs into life.

The right-back — with Thiago close to him — then releases Salah with a pacey pass that put the Egyptian on the front foot and meant he didn’t have to break stride.

With Ole Gunnar Solksjaer’s team honey potting to the right-hand side of the Liverpool attack, space opens up on the left flank. The ball — as we can then see below — is worked to Diogo Jota after Roberto Firmino works on Salah’s pass into the path of the Portuguese forward.

Jota ends up hitting the post when he ought to have scored, but the move was crafted by United fearing the threat of Thiago and Alexander Arnold and committing men to that side of the pitch and leaving openings elsewhere. 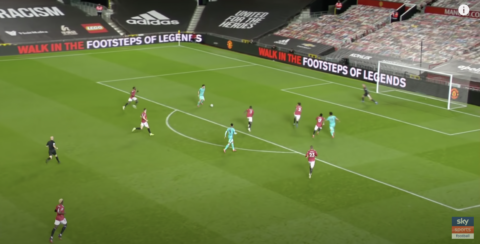 It has been a disappointing campaign for Liverpool, but the understanding between their number six and 66 could be a positive aspect ahead of next season.