At the midway point of the 2011/12 English Premier League season Liverpool find themselves with 34 points, in sixth place in the table and facing league leaders Manchester City to kick-off the second half.  Of obvious concern are the 6 home draws, as the Reds have taken only 18 of a possible 30 points from their opening 10 home fixtures.  This author has already written at great length the scoring inefficiencies that Liverpool have endured this season. Others on this site have written about Liverpool’s poor chance conversion, and again here, which has remained constantly low throughout the autumn.  Another major concern will be the availability of Luis Suarez.  Handed an 8 match ban over the alleged racist comments made to Patrice Evra, he will miss more than a third of the Reds remaining fixtures.

This report was originally written on EPLIndex.com and has been re-posted here for AnfieldIndex visitors!

The first half of 2011/12 also brought injury concerns to the fore, with Kenny Daglish having been unable to unleash the immense talent of Steven Gerrard. Daglish has also be forced to select a starting XI without Liverpool’s heart of midfield, Lucas.  The loss of Lucas was well documented here, though Liverpool have managed a 3-2-1 record since his injury required an early end to his season.  In those six games Liverpool have scored only 7 times, highlighting their greatest flaw; Liverpool allowed just 3 goals in those six fixtures, highlighting their greatest strength. 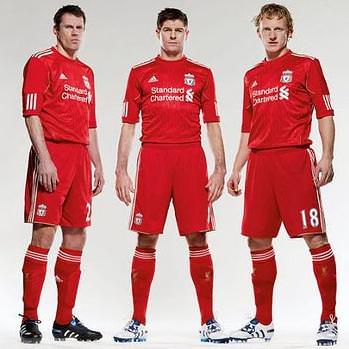 This season has also seen an influx of new talent and a changing of the guard with Fernando Torres, Steven Gerrard, Dirk Kuyt and Jamie Carragher no longer leading the Reds on the pitch.  With Torres sold to Chelsea last season, Gerrard’s injury, the emergence of Agger and Skrtel as preferred centre pairing, the return to fitness of Glen Johnson and the arrival’s of Henderson, Jose Enrique, Stewart Downing and Charlie Adam, the spine of the last great Liverpool team have been replaced.  It is incumbent upon the new arrival’s most of all to reinvest themselves in the Liverpool cause and show the resolve to overcome their difficulties in front of net. That may well start with last season’s record signing, Andy Carroll.

To say that Carroll has been a major disappointment is just a touch unfair to the striker. Purchased for an absurd sum that was reportedly wholly subsidized by the sale of Torres to Chelsea, the expectation was that the young man would provide what Liverpool had lost.  He certainly has not done that. 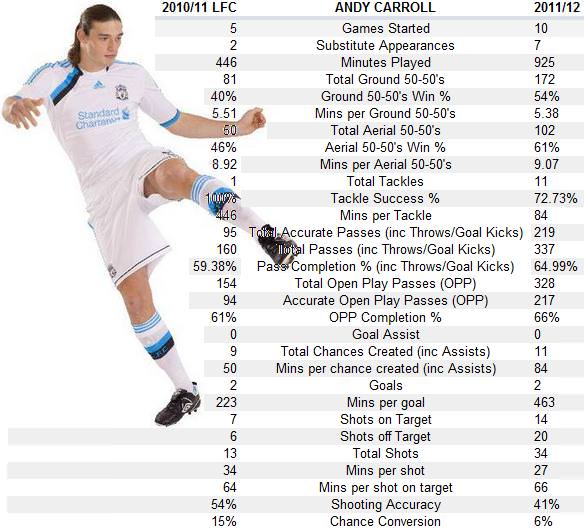 Both his chance conversion and shooting accuracy have dropped considerably since last term.  While a 15% chance conversion is not ideal – Darren Bent converts 25% of his chances historically; Wayne Rooney converted 14% in his disappointing 11 goal campaign a year ago – it is vastly superior to his 6% rate this season. To put that bluntly, Liverpool must create 17 chances for Carroll to score a single goal. Given Liverpool’s current production of 253 chances, were the side wholly reliant on Carroll for goals they would have scored just 17 this term. Of course, Carroll is part of a larger problem.  Liverpool have, in fact, converted just 9% of chances as a team and have scored only 24 goals. While the Reds 15 goals allowed tops the defensive table in the Prem, their 25 goals scored is 9th – one goal more than both Sunderland and Bolton, and just two ahead of Stoke, Villa, Fulham and Wolves.

Carroll’s game is not particularly well rounded. Despite making 337 passes he has been successful with only 219 this season. His 65% completion rate is the worst of any Liverpool field player (Pepe Reina completes a team worst 64%), and worst by a considerable margin: In a side with 81% pass completion, apart from Carroll no Reds player has completed fewer than 77% of their passes while attempting more than 120 for the year.  Further he makes few chances. In his 925′ of EPL pitch time he’s managed to create 11 chances, fewer than Glen Johnson’s 14 (in 999′) and markedly less than fellow forward Craig Bellamy. Bellamy has played 503′ this season for Liverpool and amassed 20 chances created, one chance every 25:09′. Carroll requires 84′.  Further, despite a reputation of being an aerial player, Carroll has won 61% of his chances. This is a problem only because of the volume of aerial challenges Carroll contests – 102 of Liverpool’s 416 total aerial duels. While his minutes per aerial challenge is excellent, one 9:04′, he is the 7th best Reds player at winning such challenges behind Skrtel (83%), Johnson (78%), Adam (71%), Shelvey, Agger and Carragher.

Last season’s other record purchase, Luis Suarez, has been much of what Carroll is not. Capable of creating chances – he has created 36, second on the team behind only Stewart Downing’s 39 – and makes the most of the ball at his feet with 37 successful dribbles from 103 attempted, both leading the club.  Suarez has also been a superior passer, completing 77% of his 619 attempts and connecting on 27% of his 26 crosses.  As Daglish looks to replace Suarez’ numbers and influence on the game, he should first look to a resurgent Craig Bellamy. 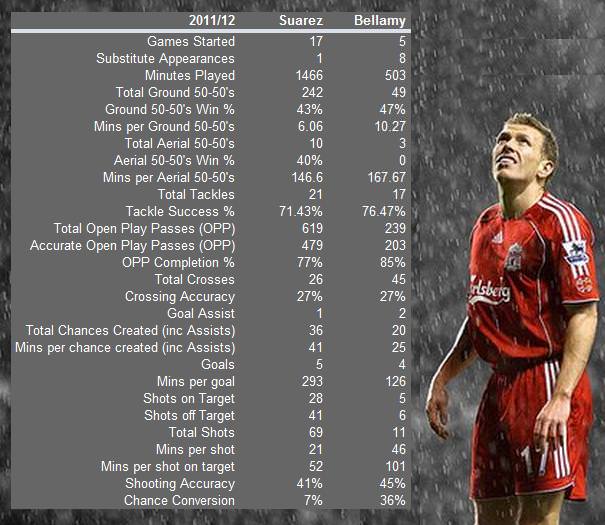 Bellamy clearly makes an impact when he is on the pitch. His chance conversion has allowed him to nearly equal Suarez’ tally for the season despite a difference of more than 900′ played between the two.  It remains to be seen if Bellamy will be able to recreated this form when he is in the lineup every match, but as the League calendar thins, Bellamy may be subject to rotation as Liverpool continue to chase silverware in the Carling and FA Cups.

The questions up front often steal the headlines, but it has been the stability at the back that have led to Liverpool’s modest successes this season. While the attacking exploits of Jose Enrique and Glen Johnson are impressive, their role in the leading defense in the Premier League accorded such freedom through the dedication and skill of the centre halves.  Both Daniel Agger and Martin Skrtel have been in good health for the large part of the season.  Each has made at least 15 starts, and played in at least 16 of Liverpool’s first 19 League matches. 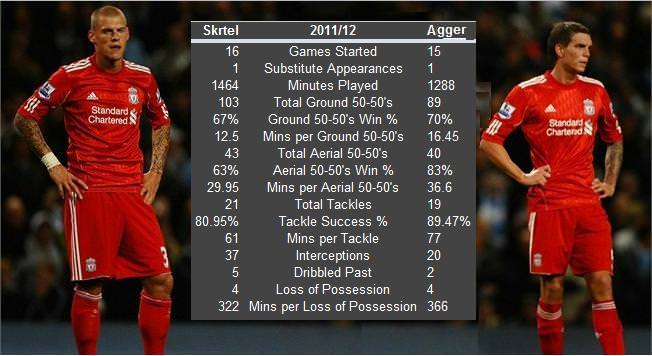 While they have committed no errors at the back, Jose Enrique and Glen Johnson have not given up any of their presence in the attacking game.  Enrique leads the club in passes attempted with 959, five more than Charlie Adam, and is just 11 completed passes behind the Liverpool centre midfielder. Jose Enrique is also third most frequent crosses, with his 75 crosses far outdistancing all Reds except for leaders Downing – 130 crosses, 25% completed – and Charlie Adam – 124, 21% completed.  In fact, Glen Johnson is also a prolific crosser, with 34 crosses at 21% completed, the 6th most of any LFC player this season.  Enrique is actually the most successful of the three leading candidates, as his 29% accuracy surpasses the 24% of Downing or 21% of Adam. 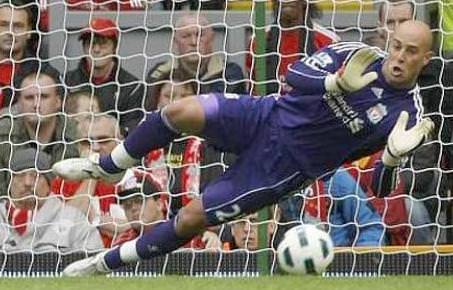 As often occurs, he’s listed first on the team sheet but discussed last in the club’s success – Pepe Reina.  Part of the reason for that is the low number of saves he’s made this season – just 50 through 19 games while making he has also missed a higher percentage of crosses – missing 4 this season. For comparison, Joe Hart has made 53 saves this season and missed only 2 crosses; Petr Cech 38 saves and 2 missed crosses.

The greatest knock on Reina this season has to be the number of errors he’s committed. He is responsible for 4 of Liverpool’s 7 defensive errors this year and needs to tighten his play in this area. Manchester City’s Hart has made just 1 error while much maligned ‘keepers Cech and de Gea have committed just 1 error apiece. While the statistics may not accurately represent the positioning blunders made be the young United ‘keeper de Gea, and Cech’s fewer errors have come with just 38 saves and 23 goals conceded.

As the Reds kick-off the second half of their campaign on 3 January against Manchester City, they will be looking to capitalize on City’s recent spate of poor finishing. With no goals in their last two league fixtures and six in their past five, City will still prove a difficult opponent as the Reds look to stretch their run at the top of the defensive table and take a vital three points as they chase a top four finish or better.

All of the stats from this game have been taken from the Opta Stats Centre at EPLIndex.com – Subscribe Now (Includes a author privileges! Demo’s and videos about the Stats Centre here & read our articles on our new additions to the stats centre here.