The Reds had to battle hard to edge past a typically combative Burnley as a well-worked goal from Fabinho saw them win 1-0 at Turf Moor. But what were the key stats as Liverpool maintained the pressure on Manchester City at the top of the table?

With the Clarets looking to sit back and frustrate Liverpool, the Reds had to rely on their set-piece routines to carry the bulk of their attack. 1.81 of the Reds 2.04 xG came from set-pieces, 88.8% of the total (data from FotMob). Klopp’s boys have scored the most set-piece goals of any team in the premier league this season, proving again how important they are to the team’s effectiveness.

They also impressed on the defensive side, with Burnley known for their own threat in these moments, they were kept to a mere 0.27 xG in dead-ball situations. Alisson, Van Dijk and Matip were solid in the face of the physical threat to their box.

In the first half of the match, Liverpool struggled to control the flow of the game and prevent Burnley from implementing their game plan. Dyche’s team were looking to play long aerial passes and pick up on second balls to move up the pitch. The colossal Virgil Van Dijk was as dominant as usual, winning 5 of 7 defensive aerial duels (71%) but Matip struggled slightly more, winning 5 out of 9 (55%).

But more important is what happens after the initial duel, and this is where the Reds failed to impose themselves on the opposition in the first half. If we look at the maps of Liverpool’s headed passes, we can see that in the first half just 7 of 27 were successful, with 4 of those 7 being cushioned backwards. In the second half, that rose to 9 of 14, with 6 of those 9 going forwards. This is a good indicator of how the team adjusted to prevent Burnley from picking up those balls in the middle of the pitch. 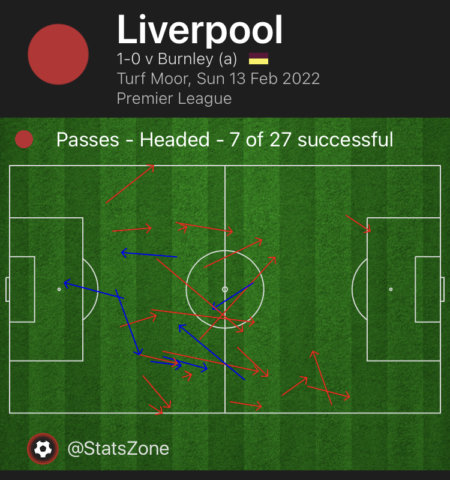 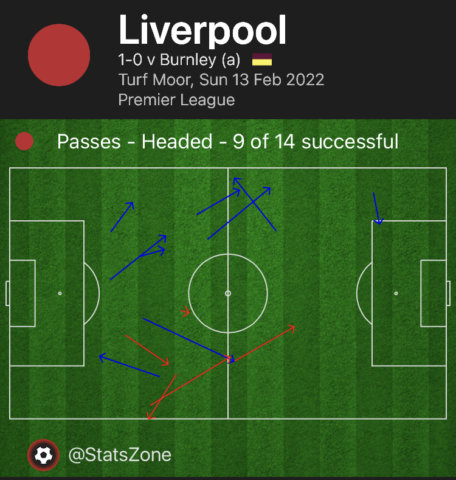 Another potential factor was ball retention. And here we need to examine the performance of Jordan Henderson. Liverpool’s overall pass accuracy was 82%. But the captain fell significantly below that bar, completing just 50% of his 36 passes. The next lowest was risk-taking playmaker Trent Alexander-Arnold on 69%. The addition of Thiago Alcantara on 59 minutes may have helped adjust this in the second half (82% pass accuracy). This helped take the pass accuracy from 71% in the first half to 83% in the second. 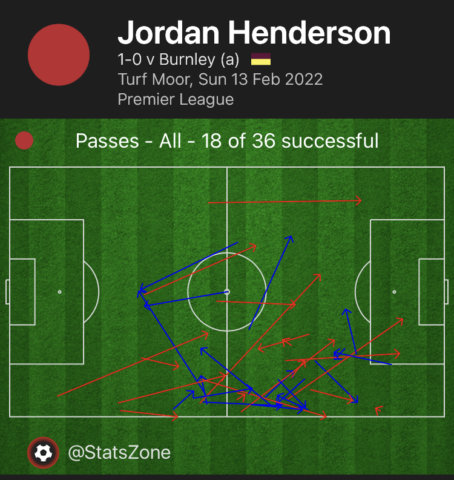 Klopp will have time to think about that on a later day, but for now, the most important stat of all is one goal to nil and three more points. The Mighty Reds march on.