Liverpool may have lost to Inter Milan at Anfield, but the Under Pressure boys soon to put to bed any doubt that the Reds deserved to go through with a comprehensive run down of the key stats from the two legged tie: 3.1 xG to 0.8 coupled with FIVE big chances to the Italian side’s zero. Case closed.

However, the main focus of the podcast was the victory over Brighton – including the continued impressive rotation, the controlled pressing and the off-the-ball form of Naby Keita. It started with huge praise from Simon regarding to changes made to the line ups, and how it seems to be the best it has ever been under Klopp. 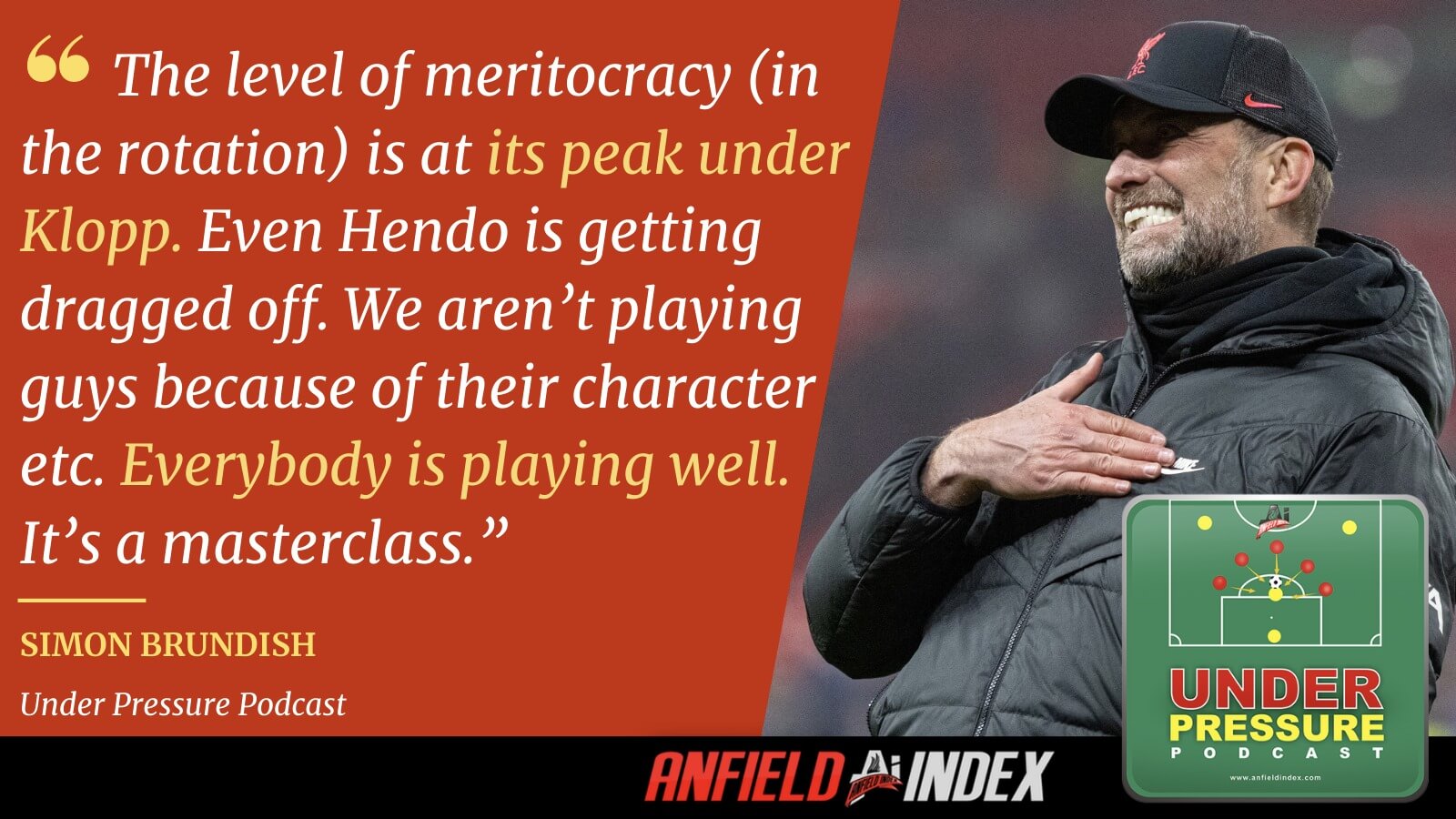 Next up – and another from Si – as the debate switched to the pace within this Liverpool side. Diaz’s speed over long distances, and even Mane saying earlier in the season that he thinks he’s the quickest over five yards. However, do we have some who are under appreciated in terms of their pace? 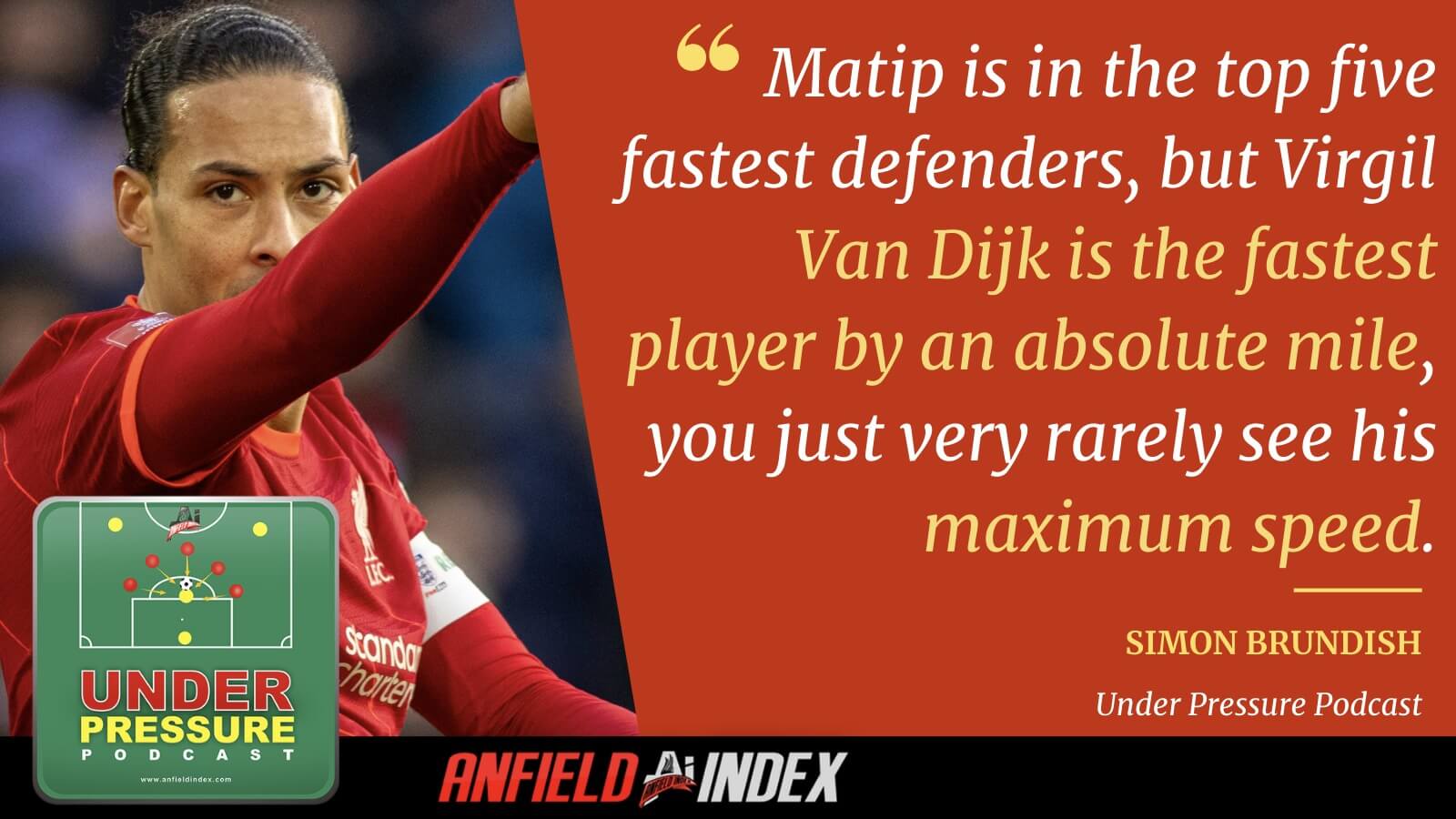 The opening goal against The Seagulls was then dissected in detail, and the various roles played by individuals; it is worth checking out the full breakdown on the podcast (at the bottom of this article) but here’s the main part:

“Matip made a phenomenal Trent-like pass, and the rapid Diaz got on the end of it. Of course there is some bravery involved, but he’s not expecting to get a knee in the chin. You expect contact, but not assault!” Simon

Of course the goal was crucial, but it inevitably led to another debate about the officials, and the VAR interpretation of the clear red card foul from the Brighton goalkeeper. It was Dan Kennett who broke it down, and his use of the word omnishambles is legendary on the UP pod (it also reminded me of this classic The Thick of It scene). 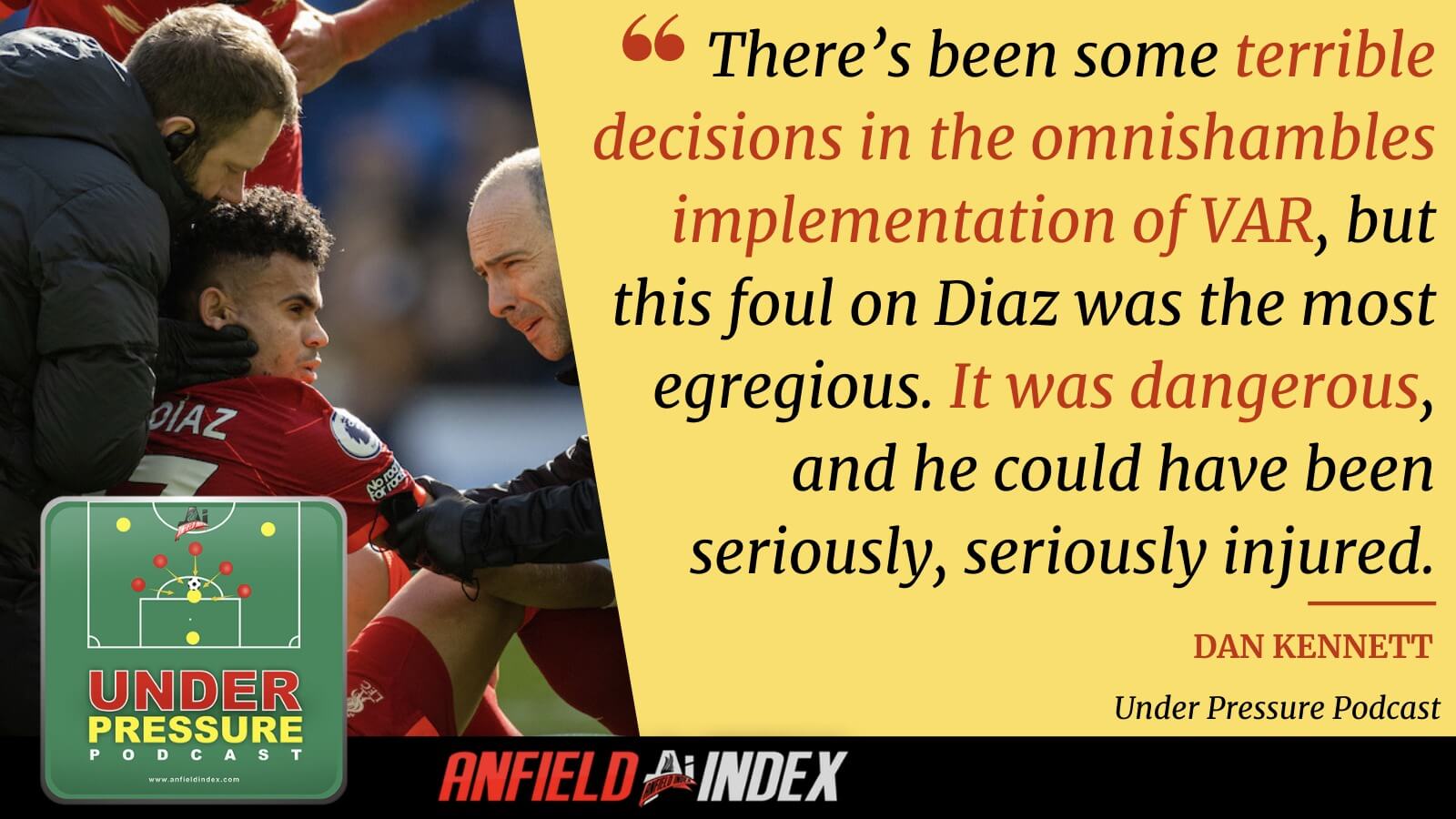 Perhaps the most important story of the whole podcast was the pressing collection – and the data analysis. Here’s the PAPA chart, which looks at the intensity over the whole of the match. The start of the match in particular was incredible. 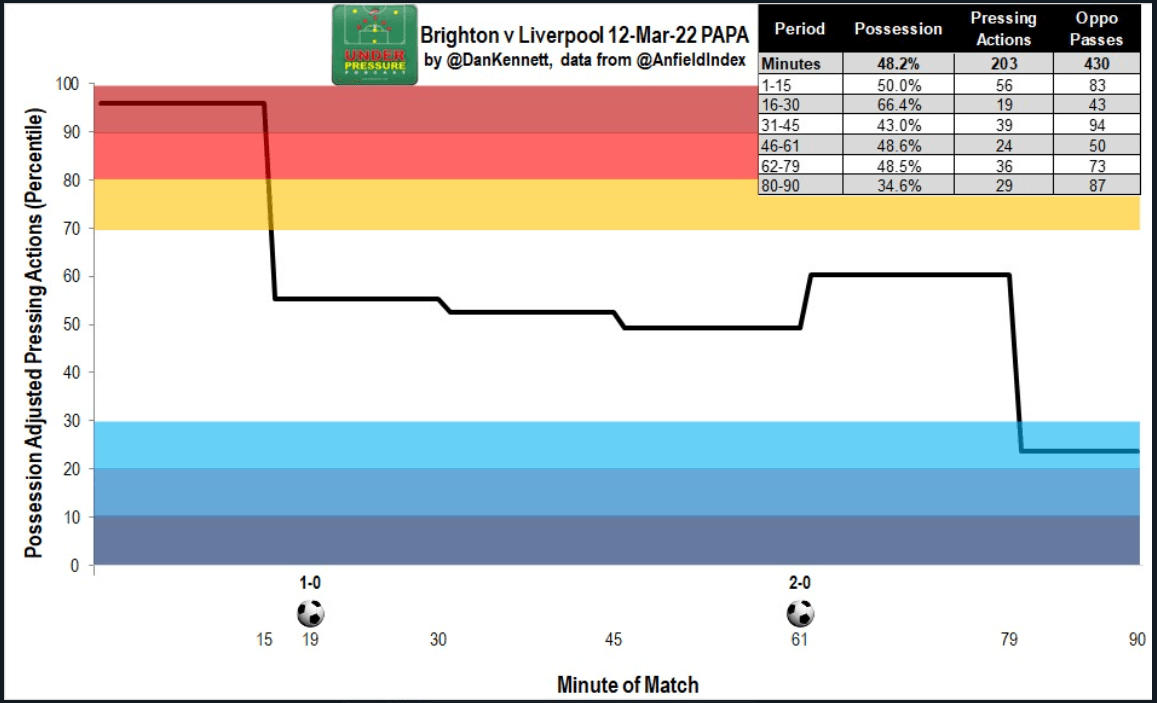 It was also on the high side when it came to total presses, as well as group and high value wins (retrieving possession, turnovers, or presses that lead to counters, shots and expected goals).

The shining light was Naby Keita, and Phil emphasised how crucial it was him to get a run of starts in the Premier League… 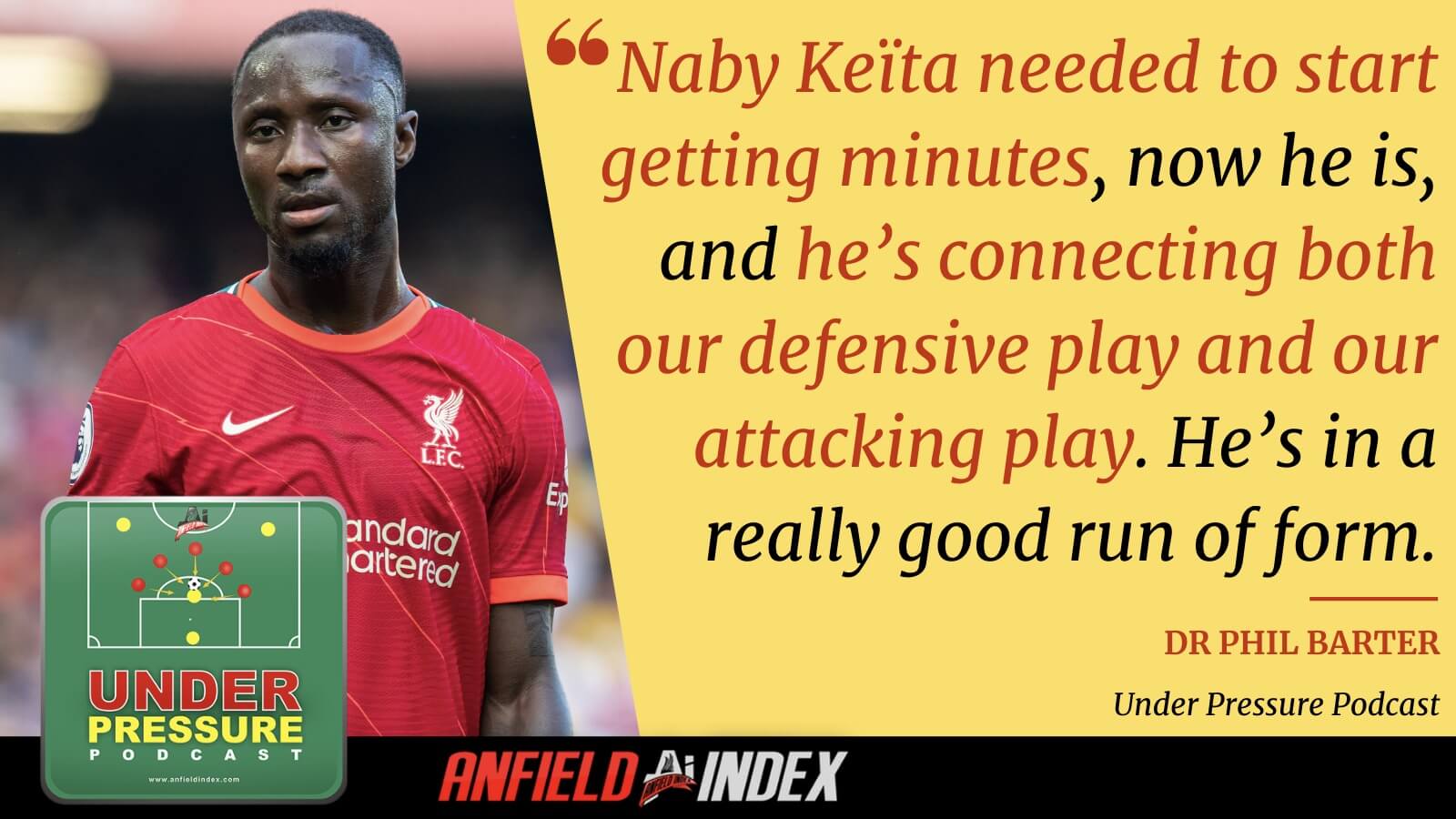 Rather than Keita’s ability to link the play in defence and attack, it was his off-the-ball performance that stood out the most. And, despite only playing over an hour, Nabylad was the best – and put on a show that was one of the best of the season according to Dan Kennett. 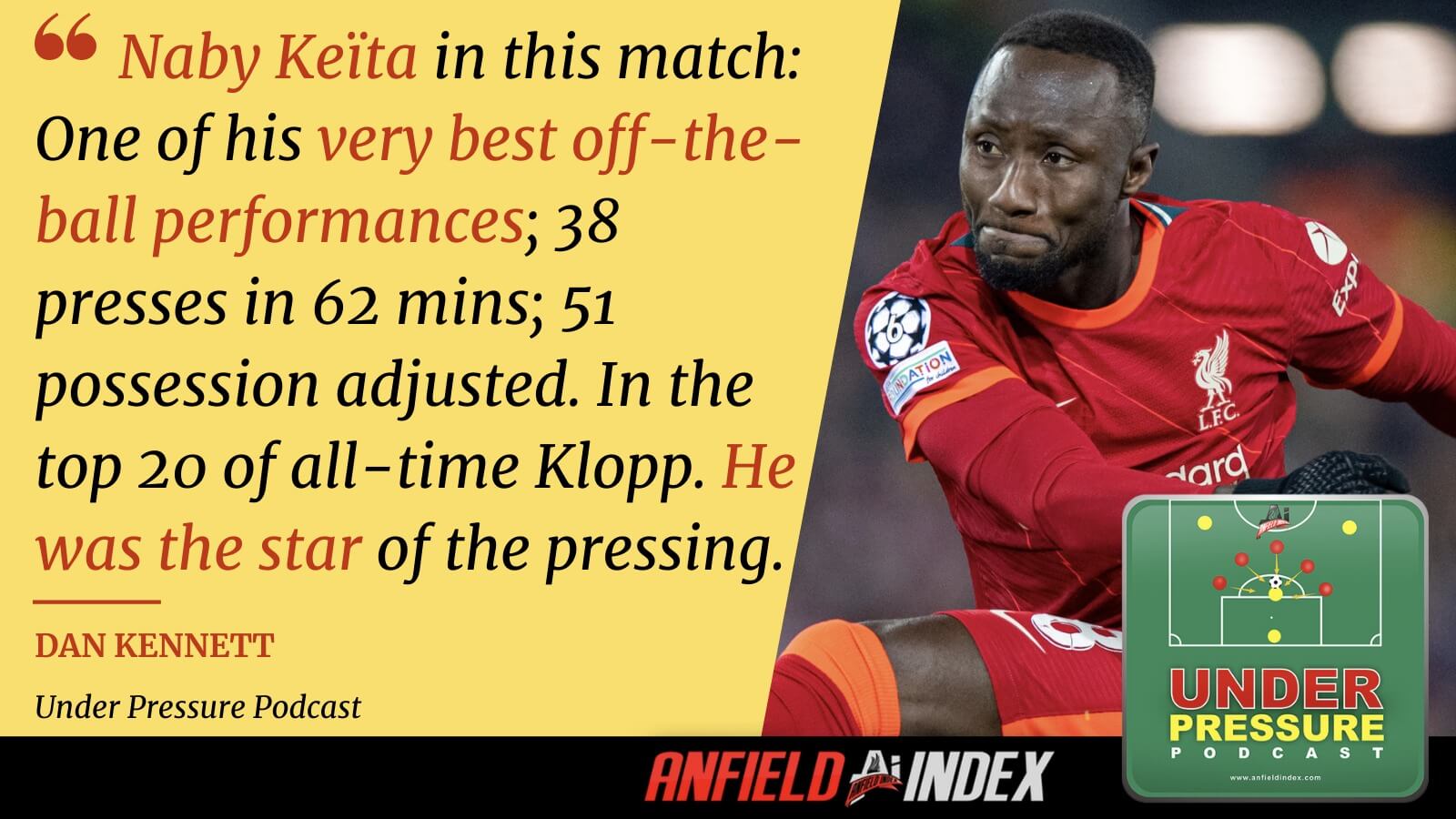 Not only do we have the quote above, there is also his individual pressing dashboard, which is a thing of beauty! 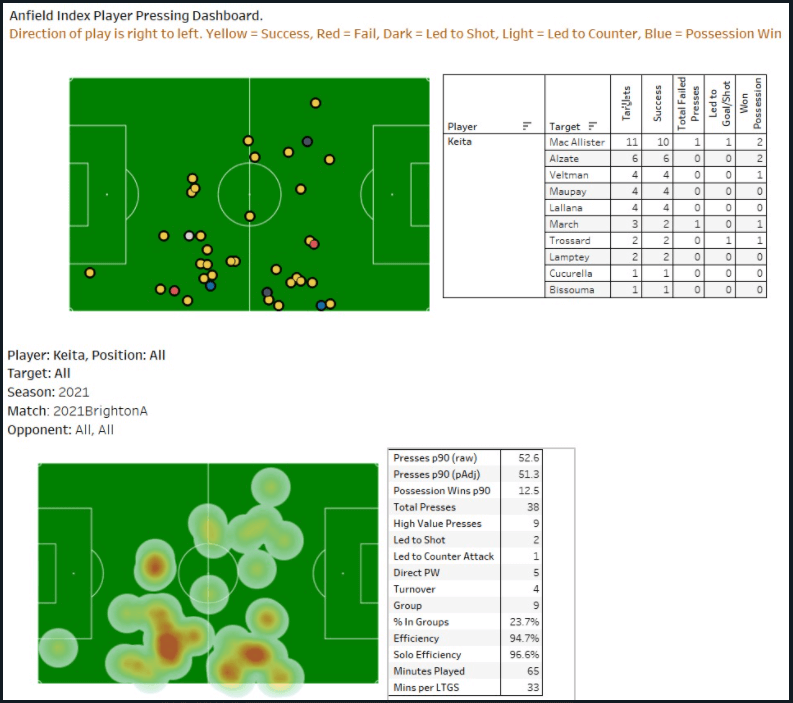