The natural excitement around the signing of Cody Gakpo is both expected and understandable. Liverpool needed an attacker and they went out and got a good one, especially in what can be considered real value in today’s market. The Dutchman’s signing will give everyone around the club a boost and help reinforce the belief that the top four is a realistic achievement. There is a harsh reality at play though for Liverpool, Jurgen Klopp, and fans alike. If they are to realise their ambitions this campaign then they and any other keen observers know this must only be the start.

A scoreline never really tells the full story of a game and such was the case at Aston Villa. Whilst the three scorers on Boxing Day came from all areas of the pitch and aside from the social media fixations on Darwin Nunez, the fact Liverpool created seven big chances shouldn’t distract from the key difference to last campaign. If Villa’s forwards had their shooting boots on, the tale could have been very different as despite fielding an apparent first choice midfield of Henderson, Thiago and Henderson, the Reds gave up three big chances in transition.

Perhaps more telling was that in keeping with this season, the power off switch seemed to be pressed in the midfield at the signal of the restart. Similarly as against Spurs in their previous away encounter, a two-goal lead at the end of the first half is great but when the legs appear to be fading from the 46th minute onwards and the opposition is clearly on top then a serious concern remains. This isn’t to criticise Stefan Bajcetic who took his goal superbly on the day, but the fact the late introduction of youth looked so terribly needed tells its own story for the midfield. 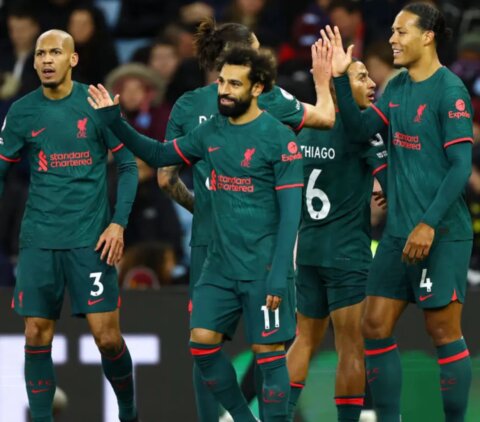 Naby Keita’s return will be welcomed by the majority, but the natural question will persist in a similar manner to the Ox around how long that will last. Fabinho’s performance was a significant improvement too, however it must be set in context against what’s been a largely disappointing campaign for the Brazilian to date. Whilst Thiago’s ability has never been in doubt, his minutes are being carefully managed and the Spanish maestro appeared to fade badly when needed. The topic of Jordan Henderson tends to ignite a furore amongst fans in the main whatever is said, but the above points could be selectively charged against the captain.

Many names have been uttered and whilst a Bellingham or Fernandez always appeared unrealistic for the winter window, it’s telling that other suggestions ranging from Caicedo to Amrabat and then Thuram appear more than acceptable to most. Whilst Liverpool signing a midfielder this window doesn’t guarantee them a Champions League spot, it seems a huge gamble to not reinforce a position that could ultimately have bigger implications on their above-named long term targets. Gakpo is a good start for the window, but it can’t be the end.