Much has been made this season about our lack of goals and our poor conversion rate. In fact, we have been consistently in the bottom three all season when it comes to conversion rates, hovering in and around the 10% mark. This week however, we’ve reached a new low and are now bottom of that table with only an 8.5% conversion rate. When you consider our rivals for the Champion’s League places, Arsenal (15%), Chelsea (13) and Newcastle (16% – they deserve respect and to be mentioned as competing for fourth spot) have almost double our conversion rate then what exactly is going wrong for us this season.

According to the statistics Liverpool are creating enough chances, in fact with 257 chances created from open play this season we’ve created more chances than Man United who’ve created 240 from open play. We are also creating more chances per game than in our previous seasons, creating 10.71 per game this season, compared to 8.87 per game last season and 9.68 per game in 09/10 season. Yet we didn’t have this chance conversion problem in other seasons. We’ve averaged a 13% chance conversion in the previous three seasons to this one so maybe it is the quality of those chances?

Well we have another metric to measure, the “clear cut chances” statistic. We must remember this is a clear cut chance, a chance that almost certainly should be put away. And this makes for some grim reading also. All though we are creating as much clear cut chances as our rivals, 56 this season compared to Arsenal (64), Chelsea (47), and Newcastle (31), we are not converting enough of these also. It may not sound a lot at first glance but when you consider Arsenal have scored 24 goals to our 16 goals from clear cut chances then that is a big difference when it comes to points.

So what conclusions have we come to so far? Well we’ve established we are creating enough chances, and we’ve established that the quality of a portion of those chances, (clear cut chances), are very high. But on both counts we are lacking in the amount of goals we score from those chances that we create. It’s crystal clear (even without the statistics) that we are having problems putting the ball in the back of the net this season.

So what other metric can we look at to help understand our problem? Let’s look at the quality of our shooting. First off, there are a number of things with regards to shooting that I am unable to quantify that may be important to analyse. Like the speed of the shot, what position the player is in when he shoots, does the player hit it with his good or bad foot, or how that shot is hit. i.e is it an in-swinger hit with the outside of the boot, an out-swinger hit with the in-step, or a good old fashioned toe-poke (wrongly frowned upon is some quarters!), my point here is: if you are on the left side of the goal and you shoot with the outside of your right boot, then the ball will swerve in towards the goalkeeper and then out towards the goalpost, in a C arc so to speak. Hence, easier for the goalkeeper to save, as opposed to curling it from outside in. 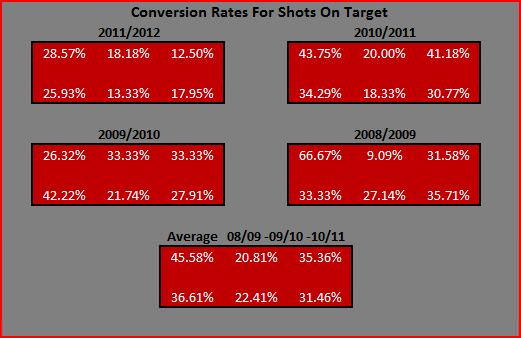 Having said that what can we measure? Well we can measure shot placement. Which part of the goal are we shooting at more? First off, let’s determine which shots at which part of the goal are we most likely to score from. The consensus is that if you shoot down the middle then obviously the goalkeeper has a much better chance of saving the shot. Bottom left or right leaves it much harder to save, and the ‘postage stamp’ top right or left is generally considered to be the hardest placement of a shot to save. But do the stats back this up? Take a look at the table above.

The red boxes represent the goal, and percentages are the amount of shots on target in any particular area that end up as goals. Also we can extrapolate all shots on target that are not goals are saved by the goalkeeper. So for example, take a look at the 2011/2012 box, out of all shots on target that are placed in the top right corner of the goal this season we scored from 12.50% of those. Given what I said above then we should score more from shots placed in the top left or right of the boxes as generally these are the hardest to save. As opposed to shots down the centre which are easier to save. Not including this season, if you look at the box with the averages in the 3 seasons previous, you will notice that the statistics generally bear that out. For example over those seasons on average 45.58% of all shots on target placed in the top left corner were converted to goals. Compare that to top centre, 20.81%, and low centre, 22.41%, were only converted to goals.

So now we’ve established, at least for us anyway, that in the 2008/2009, 2009/2010 and 2010/2011 seasons generally we scored more from our well placed shots in the corners than we did down the middle. But that’s what we expected anyway. However, when you look at this season’s box then there seems to be a slight anomaly. Every area we have converted less of our shots to goals than the average from the three previous seasons. This season we have only converted 12.50% of shots in the top right corner, compared to last season’s high of converting 41.18% of our shots in the top right to goals. So even with well placed shots we are not doing well. Why? The only answer I can give is one witnessed from watching games this season. Our shots are not powerful enough, and more often than not goalkeepers seem to be having man-of-the-match performances against us. If 12.50% of shots on target in the top right corner are converted to goals then the other 87.5% of those shots in that area were saved. So either we are hitting very weak shots or goalkeepers are performing far and above their duty against us. Maybe a bit of both? 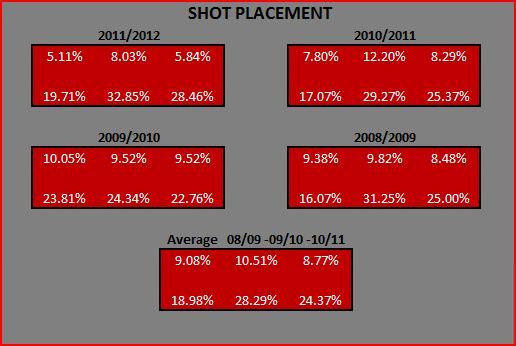 Placement Of Shots In Defined Areas Of Goal

So what about the placement of all our shots on target? Given our poor shot conversion rate (in all areas) this season then you would expect that we are shooting down the centre more often than not, where they are easier to save.

And lo and behold 32.85% of all our shots this season are placed low to the centre of the goal. Right down the keeper’s gullet. Only 5.11% of our shots on target are placed in the top left and only 5.84% of our shots on target are placed to the top right of the goal. Compare that to the previous three season’s average of 9.08% top left and 8.77% top right then it’s clear we aren’t hitting those ‘Hollywood’ areas this season. Our shot placement to the bottom left (19.71%) and bottom right (28.46%) are up on the averages of past seasons however when compared to the conversion rate graph above we aren’t converting enough of these to goals in that bottom left and right area.

So how often do we shoot into dangerous/non-dangerous areas this season and how does that compare to last season. Take a look at the chart below. 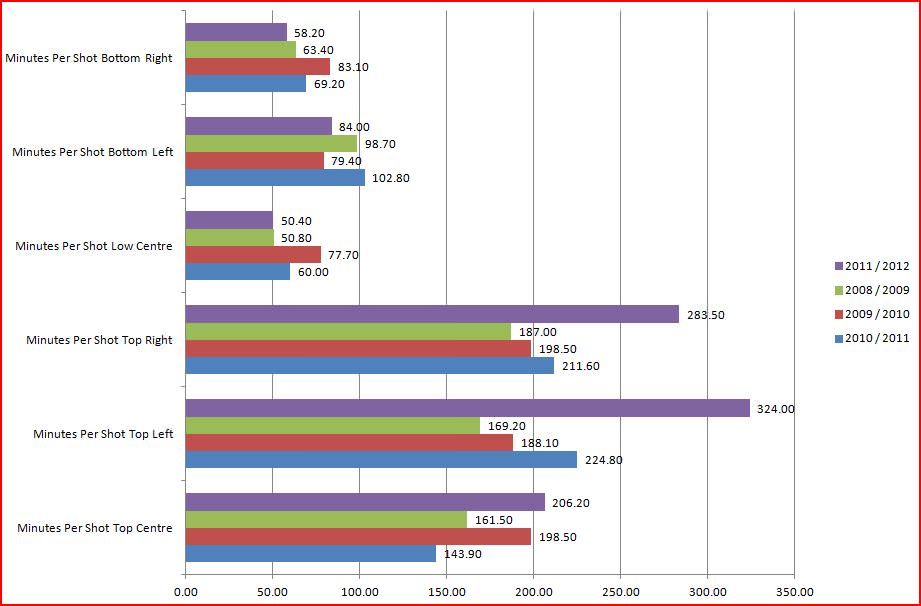 Shots Per Minute Into Defined Areas Of Goal

Lets start with the bottom right. Well there is higher chance of a goal if we shoot into the bottom right. As we confirmed above. We have a shot on target (which results in a save or a goal) every 58.2 minutes in this area. Outperforming the three previous seasons. Next we have a shot on target to the bottom left every 84 minutes. Only in 2009/2010 did shoot here more often with a shot every 79.4 minutes to the bottom left. Low centre, which is the easiest shot for a goalkeeper to save, we have a shot on target every 50.4 minutes there. More often than any other year in this area. So it’s clear we are shooting far too much at the goalkeeper and far too often compared to other years. In both the ‘postage stamp’ areas of the goal our shots on target are too far apart. Every 283.5 and 324 minutes respectively. Almost twice as long getting a shot on target this year in those areas as in the 2008/2009 season. So an area where we really need to improve on if we are to improve our very poor chance conversion rate this season. 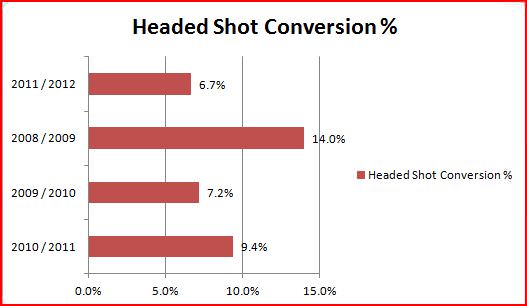 Lastly let’s take a look at headers and compare them to previous years. Take a look at the headed shot conversion chart. Again not surprisingly this season we have the worst statistic in this area. So far this season we are only converting 6.7% of our headers. Compare that to the high of 2008/2009 when we converted over double our headed shots into goals with 14% then you can see it’s another area where we need to improve on. If we’d maintained that 14% this year, then out of 75 headed shots we’d have scored 10.5 goals rather than just the five we have scored. Are goalkeepers saving more headed shots this season also? 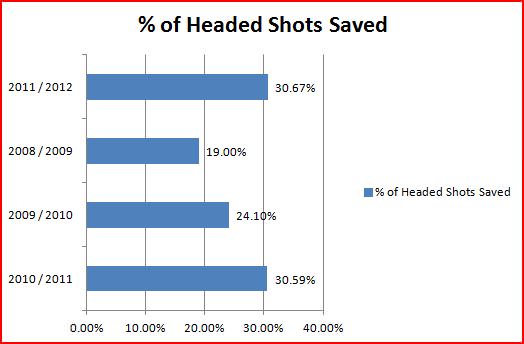 This season goalkeepers are saving 30.67% of all our headed shots. Compare that to 2008/2009 when they only saved 19% and even in 2009/2010 only saved 24.1% of headed shots. So maybe another case of a combination of goalkeeper heroics, poor placement of headers, and weak headed shots. Another area which needs a big improvement.

Thanks for reading and here’s to 3 points and win on Saturday. You can follow me here on twitter.