April 14th 2012 will be remembered as an excellent day for any Liverpool FC supporter. The day when the neighbours were beaten at Wembley in the first FA Cup semi-final for 2012. It will also be remembered for a very good 2nd half performance from their £50m strike duo Luis Suarez and Andy Carroll. Both players found their names on the scoresheet and were the star performers that turned the game around for Liverpool. 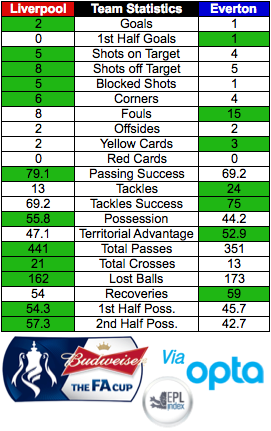 It was an awful first half for Liverpool in which Everton punished their inter-city counterparts’ failures in defence. Apart from that moment there was nothing to write home about in the 1st half. A performance that lacked any ambition or drive in the first half was transformed in the second half with power and persistence. Liverpool didn’t take their foot off of the pedal and continued to pressure Everton’s goal. The pressure paid off with Distin making a poor passback which cost them. I was speaking to a few Everton supporters on the train journey back and they were blaming Tim Howard. They said that he was static and was too far back on his line. This was an interesting observation but I personally thought the pass lacked both power and direction. Liverpool’s number seven capitalised on the mistake just as Everton’s had done in the 1st half.

Andy Carroll had missed a gilt-edged chance at the start of the second half which could have come back to haunt him. However, the persistence I mentioned earlier is attributed to Andy as he didn’t give up and found himself in the right place at the right time and got on the end Bellamy’s excellent free-kick. It had only been four minutes since Bellamy had come on, Bellamy hadn’t even have attempted a pass just yet. He’d only made a couple of touches but not even attempted to pass the ball before he got the assist.

There was time for more and Maxi could have got his, now trademark, goal at the far post however somehow managed to find Liverpool FC’s trusted friend: The Post. Apart from the mistake they made for Everton’s goal (Agger & Carra), the three centre backs (playing in 4-4-2) played very well. Jamie Carraghar made a nuisance of himself to Everton attackers in the second half and Skrtel always remained on top of the strikers with clearances and headers.

Thanks to @OptaJoe and the Opta Sports team as they kindly provided us with some Match Stats for the game yesterday.

Please click on the next page (found at the bottom left of page to view the stats).

Next Page: Full Liverpool FC Stats from the FA Cup Semi-Final Vs Everton.

Liverpool FC’s pass accuracy for the semi-final was 79.1% which is slightly below their Premier League average of 81%. The full pass accuracy breakdown can be found in the column chart below: 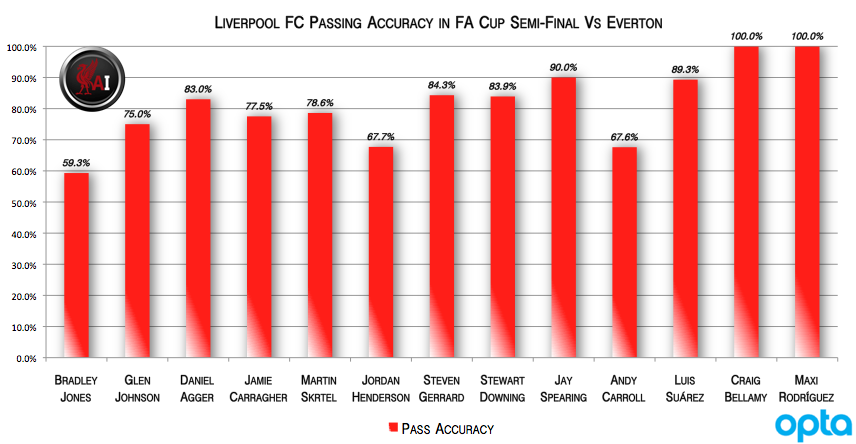 As you can see from the chart above it is Jay Spearing that has the best passing accuracy from the semi-final. A 90% average is excellent on the day and Spearing also won 67% of his tackles on the day too. We were more impressed with Luis Suarez on the day as his pass accuracy of 89.3% is way higher than his Premier League accuracy of 76%. Suarez came to life in the second half and surprisingly only had two attempts at goal. The important statistic is that he found the back of the net with one of these and now has scored in all three of his FA Cup appearances.

Jordan Henderson and Andy Carroll had the lowest pass completion on the day however both of them contributed in different ways. Obviously for Carroll it was with the goal, but we’ll come back to Henderson a little later.

Further breakdown of the passes by Liverpool players: 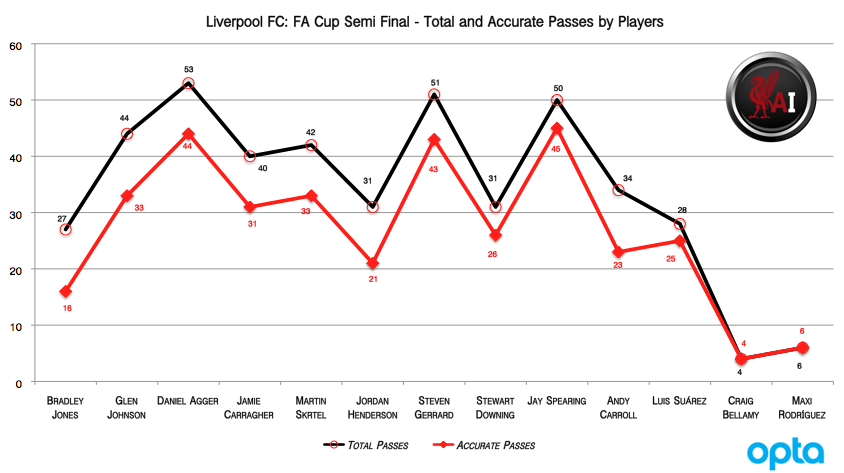 Daniel Agger attempted the most passes for Liverpool in the FA Cup Semi-Final followed by Steven Gerrard and Jay Spearing. Daniel Agger was untroubled in his unfamiliar left back role and tried to join in with the play down the left win although Stewart Downing didn’t really give him any options to play a pass in behind Everton’s rearguard. Everton would drop quite deep to stop any passes being played behind them. When Liverpool did managed to get in behind them it was in the second half when they were try to push forward after Liverpool had equalised. Bellamy was brought on and immediately found himself running in behind the defence. Suarez also used his tremendous dribbling skills to find a way a way behind Everton late on.

After Everton had taken the lead, Liverpool really hadn’t had any clear cut chances in the first half. The first one fell to Carroll in the second half which he headed wide. Luckily he had more chances and he was able to find the back of the net with his last attempt on goal and probably the most important of his career.

Glen Johnson lost possession for Liverpool on most frequently (20 times) in the FA Cup Semi-Final whilst Jordan Henderson gained possession most (outfield players) for Liverpool. We know that Jordan Henderson has come in for a lot of criticism but in his last two games for Liverpool (and as John Barnes mentioned on ESPN yesterday) he gave 100% effort for the team’s cause. He’s now started to win the ball back and work really hard for the side whereas he’s seemed anonymous previously.

In the game against Blackburn he played the right back role for around 65 minutes and I’d lost count at the times he was working on the right flank all by himself. At times he just charged forward with the ball taking pressure off of the defence and attempting to retain possession for his side.

Although his pass accuracy statistics may not do him any favours he won the only tackle he attempted and won the ball back most frequently for and outfield Liverpool player. In terms of losing possession he was joint third in losing possession the least. So he’s going in the right direction.

Further stats via @OptaJoe and the Opta Sports team can be found below:

Jay Spearing lost the ball the least for Liverpool in the semi-final whilst Glen Johnson lost the ball the most in the side. There were times where Johnson’s touch seemed a little off or he got caught in possession. This will improve with time as he’s had a long lay off (6-7 weeks). It’s no co-incidence that Liverpool have had two consecutive positive results when Daniel Agger and Glen Johnson have played some sort of role in the game. Their availability is key to Liverpool continuing any sort of form or run towards the end of this season.

Luis Suarez only had two attempts at goal in the semi-final vs Everton which is below his average of 4.1 shots per game in the Premier League. The first half was a poor one for Liverpool as they didn’t attempt many shots and none called Tim Howard into action. The second half was a different affair with Liverpool scoring two and forcing Howard to make three, albeit simple, saves.

More surprising was the fact that Steven Gerrard only had one shot, off target, and that it was in the first half. You’d expect Steven to have more shots when chasing the game but his role yesterday was to hold in midfield and protect. This is where Lucas is missed as you can expect Lucas to hold in front of the midfield on his own whilst Jay Spearing doesn’t have the full confidence of his team mates just as yet. Lucas is a very important part of this side and will improve the team immeasurably when he returns in August.

Andy Carroll had five attempts yesterday and his only one on target found the back of the net, giving him a chance conversion of 20%. It’s a big ask but if he could produce this form every game he would really be worth his price tag. Carroll could have had a hat trick yesterday, one miss was pretty bad and another was centimetres past the post however the key was that he didn’t give up and continued to find positions for an attempt. We hope he continues in this vain and proves all of his doubters wrong. In the meantime he can take pleasure in the fact that he’s just scored the most important goal of his young career – a winner against Everton in the first all Merseyside FA Cup Semi-final at Wembley Stadium.

All stats in this article are via @OptaJoe and the Opta Sports team. Please do give Opta Joe a follow on twitter for more excellent stats.