I think it’s fair to say that Raul Meireles is the only positive that can be taken from Roy Hodgson’s disastrous tenure as Liverpool manager.  It’s taken Raul Meireles half a season and a manager who immediately recognised his best position to get him firing on all cylinders, but did we really need him?  Should he have been the priority over reinforcing the front line and providing competition to Torres?

Hodgson shipped out Alberto Aquilani for a deal that if made permanent, will see Liverpool lose the best part of £7m, he then brought Raul Meireles in for £10.7m (not to mention the £9m in total spent on Poulsen and Konchesky that could have been avoided by keeping Insua and realising that a youthful Jay Spearing is more capable than an aging Christian Poulsen).  That £20m would have come in quite handy in the search for a striker in the summer, but we needed a playmaker because Aquilani wasn’t up to the job was he, but maybe he was just misunderstood and his early injuries meant it took him a little longer to settle

Let’s look at a few of the facts, Aquilani started only 9 league matches last season, coming on as a sub in 9 more (although 3 of those substitute appearances were as a very late substitute and he touched the ball 14 times in those 3 appearances), he averaged a pass success rate of 80% (3% less than Lucas has achieved this season), won 51% of his tackles, scored a solitary goal against Portsmouth and 6, yes 6 assists.  They’re pretty good stats for a player regarded as a flop and unsuited to the English game, we all know that he’s been in fine form for Juve this season but there will still be those who will not accept that he was coming good at Liverpool.

Chalkboard from arguably Aquilani’s most impressive game for Liverpool (assists/goals are white, passes /shots on target blue and off target red). 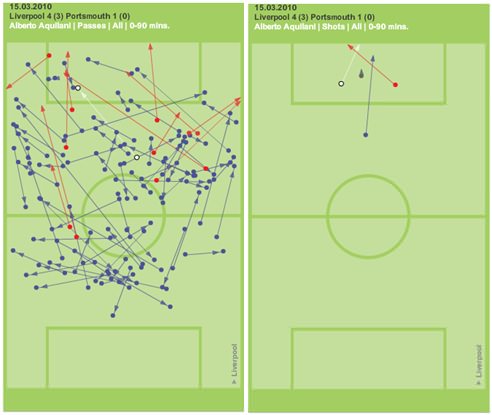 So on to his replacement Raul Meireles, he too endured a tough start to life at Anfield, exacerbated by Hodgson playing him out of position on the right and Liverpool’s dismal start to the season, but he’s started to find his feet and his recent glut of 5 goals in 6 games has lifted the pressure (along with a team now taking a more expansive attacking approach), his pass success rate isn’t as good as Aquilani’s last season and stands at 75%.  The defensive side to Raul Meireles game is superb and he wins 67% of his tackles, that’s 8% above the team average, 10% above Lucas and 24% better than Aquilani. 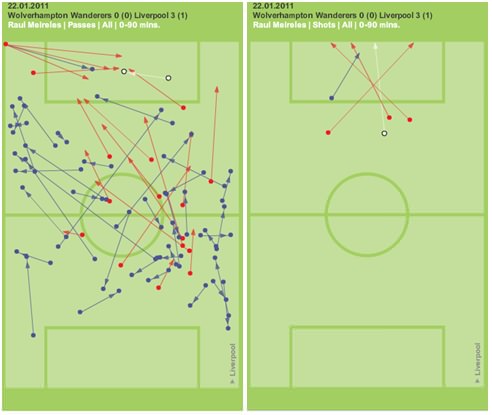 So between Raul Meireles and Aquilani we have 2 players who have contributed to 13 goals in 31 starts and 10 substitute appearances, which roughly works out at one or the other scoring or assisting a goal every 3 games, both are good passers of the ball and in Raul Meireles we also have a player who is clearly adept at breaking up the play.  It’s not something any of us want to think about but Steven Gerrard isn’t going to go on forever, so having both Meireles (27) and Aquilani (26) at Liverpool over the coming years will provide at least some of the creative spark that Gerrard has given us over the last 12 years

Are we better off with Raul Meireles than we would be with Aquilani, it’s very hard to say and it could be debated either way until the cows come home, but one thing we can say with confidence is that they’ve both contributed at the sharp end of the pitch and they both improved the more Premier League games they got under their belt.

What I can say with confidence is that Aquilani and Raul Meireles in the same squad would be better for Liverpool Football Club than having a player lighting up Serie A, one on loan in the Championship and a Dane who is never going to be anything more than mediocre.