Daniel Agger struggled more than most in adapting to the tactics of Roy Hodgson. Daniel Agger made no secret of the fact that he was uncomfortable with the notion of hoofing the ball up the pitch at every opportunity, explaining his issues to a Danish TV station, “The manager has a philosophy that we’re playing football further up the pitch and then you have to play a different kind of football at the back. That’s not my style. That’s not the type of football player I am. I like to keep the ball on the ground. And I’m going to keep doing that. Whether he’ll use me or not, time will tell.”

These comments, along with injury problems, meant that Daniel Agger played in just 8 games for Hodgson and failed to flourish under the new style of play.

The 3-0 defeat against Manchester City was one of the few games where Daniel Agger played the full 90 minutes. A comparison with Reina’s passing from the back demonstrates Daniel Agger’s defiant attitude towards the long ball game: 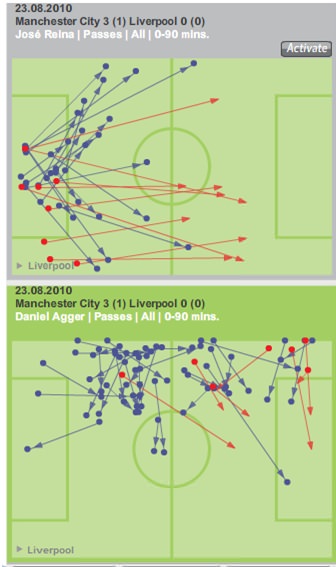 Reina’s chalkboard shows lots of hit and hope balls, with the multitude of long red arrows showing clearly that this strategy did not work. Of the 11 long balls fired into the Man City half by Reina, only 2 reached a Liverpool player. Daniel Agger, by contrast, clearly picks out short, forward balls that meet their intended target an impressive 82% of the time. His only long ball into the opposition half went straight to a Man City player.

In the following game against West Brom, it was a similar story with very similar chalkboards for Daniel Agger and Reina: 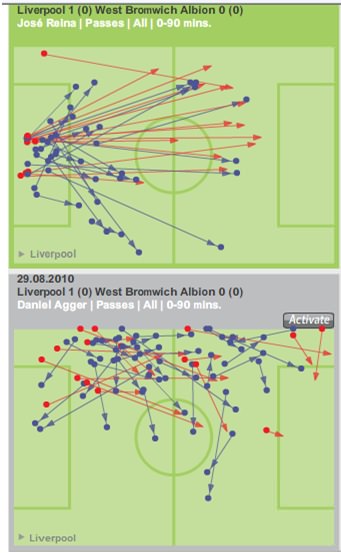 It is clear from both games that Reina’s distribution is wasteful at best. It is also clear that Daniel Agger does not adopt this long ball approach. As if to prove his point, both of his attempts at a long ball resulted in Liverpool giving away possession.

Unsurprisingly, Hodgson punished Daniel Agger for his willingness to play attractive football and he was left on the bench for the next game against Birmingham City. A look at the passing from the two central defenders in this game shows that they were both more willing than Daniel Agger to adopt Hodgson’s long ball strategy: 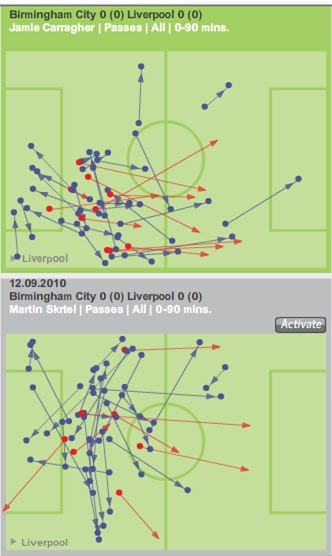 The amount of red lines crossing the half-way line on this chalkboard shows how unsuccessful the long ball game was against Birmingham. If further proof was needed as to the wastefulness of this strategy, the evidence is in the 0-0 score-line.

From this game on, Daniel Agger became a bit-part player for Hodgson. He was given 62 minutes against Sunderland, but only after first choice left back Paul Konchesky was injured. In this game, he seemed almost resigned to the new way of playing and demonstrated that he was as capable as anyone of hoofing balls to the opposition defence without success: 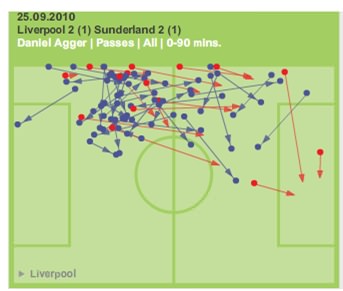 It is safe to assume that Daniel Agger shed few tears over the departure of Hodgson in January. He explained why he was so happy with the appointment of Kenny Dalglish following Liverpool’s fourth straight win in the post-Hodgson era, “First of all because he likes to play positive football, going forward, and keeping the ball on the ground and I think he is good among the players.”

The second half of the season should see Daniel Agger reclaim his status as a first choice starter in central defence, as he and Dalglish share the philosophy of positive, attacking football. Already, his pass success rate has risen from 70% under Hodgson to 78% under Dalglish. His tacking success rate has gone from 65% to 76% and he is a more positive and productive player now that he is in a system befitting of his talents. Daniel Agger did not become a bad player overnight under Hodgson, and under Dalglish’s system he looks certain to flourish.