There’s nothing like an intense derby match to separate the wheat from the chaff. An evening kick-off which stirred memories of those famous Anfield occasions under the lights, and a battle for bragging rights on the pitch, on the streets, in the pub, and most importantly, in the league table. The clichés rolled off the tongues of the BT Sport presenters, perched on their posh scaffolding around the ground – not for the faint hearted – and the journalists in the Main Stand left the proverbial form-book whence they came.

The Liverpool players you expect to embody the derby spirit are the locals such as Gerrard and Flanagan, and the players like Suarez and a broken headed Skrtel who connect with the fans and fight with them for every ball. Given his recent form, diminutiveness, and possible eye on World Cup fitness, the player you might not have expected to come out on top in the Spirit of the Derby Stakes, was Philippe Coutinho.

Coutinho ran the midfield until he tired late in the second half, but you can forgive him some late weariness given the shift he put in. Liverpool’s number ten used his natural technique to bring some calm to an often frantic midfield, but also added to this intensity himself when the team didn’t have the ball. Brendan Rodgers decision to play him slightly deeper and more centrally was rewarded as Coutinho closed down and pressed the opposition as well as anyone, and used his prominent position to orchestrate midfield possession for his own team.

The graphic below shows Coutinho’s coverage of the central areas. 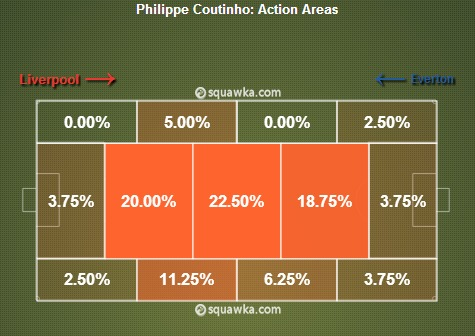 According to WhoScored, Coutinho completed five tackles during the game, second only to Aly Cissokho’s six, and two ahead of Gerrard’s three. On top of this he made more key passes than anyone else in the Liverpool side with four, and had the most touches of the ball with 66 (Aly Cissokho was second(!)). 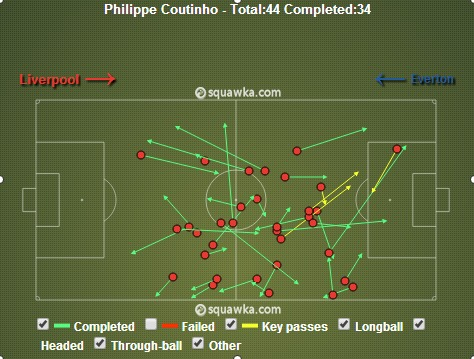 Combine these stats with what was evident when watching from the stands, and there’s no doubt that Coutinho was all over this game until his withdrawal on 79 minutes.

What makes this performance even more notable is that it was a marked turnaround in from for the Brazilian. It’s not been plain sailing for him this season, and in the main he’s found his exceptional first few months at the club difficult to improve upon. Maybe opposition defences are now more accustomed to him, or maybe he’s trying too hard to get his name in lights in order to attract the attention of Big Phil Scolari, but for whatever reason he’s not quite clicked in many games this season.

If you asked Liverpool fans who they’d drop from the starting eleven had one of the mythical January signings arrived, many will have named Coutinho.

This assertion is perhaps unfair, as even when Coutinho isn’t firing on all cylinders, he’s a vital part of Brendan Rodgers’ varying systems. His control of the ball means he can receive passes in tight situations which helps the team retain possession in tight areas in the opponents half. It’s a skill he learnt playing futebol de salão on the streets of Rio de Janeiro, and one which transfers effortlessly to a large, luxurious, grass covered pitch.

A good example of the stability he offers was shown during the FA Cup game versus Oldham earlier this year, when he and fellow Brazilian Lucas were introduced at half time. The pair slotted into the side and brought some calm in their respective halves of the pitch, midway through a game where Liverpool had looked sloppy and struggled to make things happen.

One criticism might be his over-eagerness to play through balls, which results in many failed passes and turnovers of possession. However, it usually only requires one of these to come off for one of his team-mates to be clean through on goal, so we should forgive him the odd mishap!

Hopefully we’ll see more of the Coutinho we saw in the derby throughout the rest of the season, and his new hard-working role could be more than enough to persuade Luiz Felipe Scolari to try him out in Brazil’s one remaining official friendly before the World Cup. If he can stay fit then the lack of January signings in this position might be irrelevant.

Are you from near the Midlands area? If so you should attend A Night in Birmingham with John Barnes, John Aldridge and Jason McAteer!

Former Anfield Index Podcast guest host Noreen Khan is the host and there’s a three course curry on the menu! All proceeds to charity!