Replacing Luis Suarez, like-for-like, is impossible. The Uruguayan brought an array of unique qualities, and equally unique flaws, which can’t be replenished by the simple act of buying another footballer.

Suarez will leave a void when it comes to many aspects of the Liverpool experience, including the tactical set-up, and what follows is an assessment of what he brought to the system, and how the system could help to replace him.

Liverpool flirted with numerous tactical systems during the 2013/14 season, and this was mainly due to the undroppable form of the two strikers, Luis Suarez and Daniel Sturridge.

Suarez was suspended for the first month of the season, as a result of some misdemeanour or other, with Liverpool winning the first three league games without him by one goal to nil. Around this time the formation resembled a 4-3-3 with two deep midfielders, and Iago Aspas working in the hole behind Sturridge.

The graphic below shows Liverpool’s tactics for the second game of the 2013/14 season, away to Aston Villa, which they won 1-0 thanks to a goal from Daniel Sturridge. 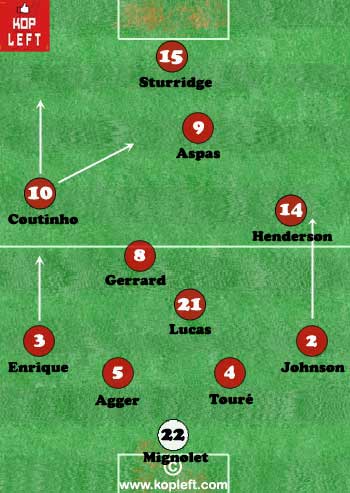 On his return to the side for the 0-1 League Cup defeat against Manchester United, Suarez played a role buzzing around Daniel Sturridge up front. He remained in this role for the next game against Sunderland in the league (below), which Liverpool won 3-1 with Sturridge opening the scoring and Suarez bagging a brace. This was the strike partnership whose goals would propel Liverpool to a serious title challenge. 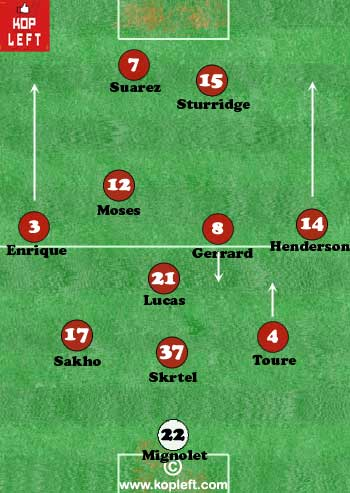 To accommodate the pair, Brendan Rodgers tinkered with his tactical set-up, and as a result was faced with other dilemmas such as what to do with Steven Gerrard, where to play Jordan Henderson, and as the season progressed, how to add Raheem Sterling to the mix.

The introduction of new tactical roles for these players defined Liverpool’s season. Gerrard dropped deep to play the role of Regista, meaning Lucas’ role in the side lessened as the season progressed. A move which was partly due to a knee injury the Brazilian picked up against Aston Villa in January.

Henderson came into his own as an all action central midfielder, providing energetic support for Gerrard, whilst Sterling emerged as one of the best footballers in the side, playing a creative role in the centre as well as his usual wide position when required.

Whilst it would be wrong to say that Liverpool’s tactics were built solely around Suarez, the fact he had to be in the side given his world class qualities contributed heavily to Liverpool’s shape. The free flowing attacking football we saw was very much a result of this shape, and when combined with the form of Sturridge, Coutinho, and Sterling, it played a huge part in the 101 goals and 84 points amassed during the season.

Apart from the odd game out wide on the left, Suarez played the majority of his football up front. Along with his obvious attacking strengths, he brought a work rate and willingness to close down, which contributed greatly to the system Liverpool played. Liverpool’s success in a diamond formation meant Suarez could stay alongside Sturridge up front, with the freedom to drop deep, drift wide, or play on the last defender.

Below are Liverpool’s tactics against Newcastle at home. The game saw Liverpool win 2-1 using the diamond formation, albeit with Gerrard pushed slightly further forward than usual. This was Liverpool’s last game of the season, and Suarez’s last for the club. 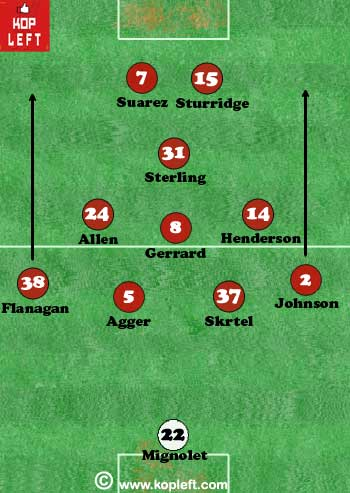 With Suarez gone, it is questionable as to whether we see the diamond formation again. Brendan Rodgers could shift to a lone striker system with two wide players, two midfielders, and at least one full-back contributing to both phases of play.

On joining the club Rodgers stated that he favours the 4-3-3, with three at the back as an alternative, but as we’ve seen the manager isn’t averse to moving with the times and evolving his tactical system to suit his players, and/or the opposition.

With this in mind, the only way Liverpool can begin to go about the task of replacing Suarez is to alter their tactical system accordingly. New players will come in to provide options, and hopefully provide a few of the attributes we’ve lost to Barcelona. Ironically, the solution to this could be a switch to a more Barcelona-like formation.

The Anfield Index tactics board below shows how Liverpool could line up without Suarez in the 2014/15 season. Emre Can could be used instead of Gerrard to provide more tenacity in front of the back four, and a few positions are still uncertain as we await further signings. Ricardo Rodríguez is included at left-back, but this is wishful thinking, and Lazar Markovic is selected as a wide forward even though this transfer hadn’t gone through at the time of writing. 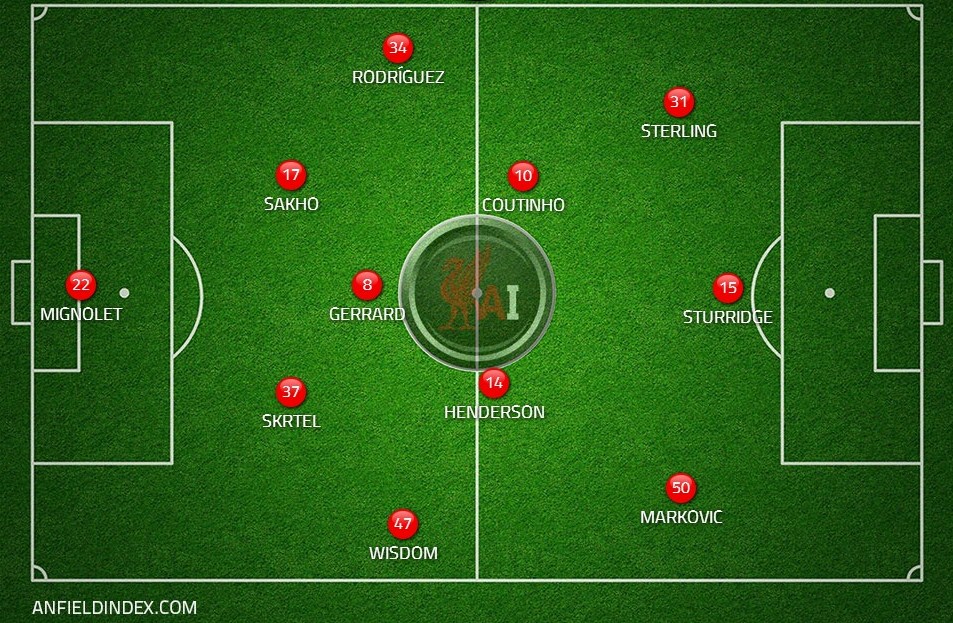 The great thing about Suarez was that he wasn’t just a world class individual, but he was a world class team player too. The team can’t afford to carry anyone as we might have done at times last season, when we relied on the SSS to get us out of a hole.

As well as new signings coming in, current players will need to step up. Sturridge will get his chance to be the main man, and more responsibility will be placed on the young shoulders of Raheen Sterling. Coutinho’s creativity will be more important than ever, and we’ll need our midfielders, especially Henderson and Allen, to show more composure in the attacking third.

The lack of Suarez will also affect the defence. There will be less room for careless errors at the back, but they may get more help from the two wide forwards defending from the front. Depending on personnel, it would be good to see the defensive line push further up in this formation, but then there are doubts over Simon Mignolet’s ability to sweep up behind a high defence.

The team will miss his will to win, and the fans will miss the guaranteed entertainment he provided on a weekly basis, but if certain players can step up to the plate then the influence of Suarez could remain at the club long after he’s gone. Our young players, especially Sterling, will have learnt from him, and now it’s time for these players to come to the fore.

It’s up to the manager to make sure they have a tactical system in place which will allow them to shine, and the evidence so far suggests that there’s no one better for this task than Brendan Rodgers.