It’s often said that pre-season friendlies are meaningless money-spinning exercises, which if anything serve only to improve match fitness and sharpness. However, there’s an obvious trend when it comes to Liverpool’s opponents for these warm up games, and some noticeable tactical systems at play even at this early stage. With this in mind, here’s a look at what we can take from these fixtures, as Liverpool head into the International Champions Cup.

We’re now four games into pre-season, and the team have played a variety of opponents using a standard 4-3-3 system, usually with a 1-2 set-up in midfield. Players have come in and out of the side, and the personnel making up the eleven has changed on a regular basis, even within games.

Whilst the performances from many players have been rusty, and the final product hasn’t quite been there, the team already seem to understand the tactical systems to a good level. This is where these pre-season games can be important, as they help transfer the tactics worked on in training to a match situation. It’s handy to perfect these systems when the result is meaningless, rather than still be working on them come the first games of the season proper.

Even in the opening game against Brøndby, an unfamiliar midfield three of Conor Coady, Krisztián Adorján, and Joe Allen covered for each other as if they’d been playing together regularly, comfortably swapping positions when required.

This demonstrates the work done on the training field during the time Brendan Rodgers has been with the club, and shows the benefit of applying the same philosophies at every level. The reserve and youth sides regularly turn out playing 4-3-3, and the extra preparation time the first team had between games last season has obviously been used well.

Now Luis Suarez has decamped to the Camp Nou, it will be interesting to see if Brendan Rodgers utilises the diamond midfield as regularly as he did in the second half last season. The success of this formation was largely down to the central midfielders’ ability to support to Steven Gerrard, and also provide cover for the full-backs should they advance. It also become the best way to shoehorn the undroppable duo of Suarez and Daniel Sturridge into the side, and at the same time offered roles for Philippe Coutinho and/or Raheem Sterling.

The diamond was used from kick off against Preston North End, but an early injury to Emre can forced a change and an opportunity to introduce the impressive Jordan Ibe. His introduction saw the side revert to the 4-3-3 we saw against Brøndby, but the fact the diamond was used at all suggests it’s one of the systems being worked on in training. We could well see Sturridge accompanied by another centre forward at some point in the season. 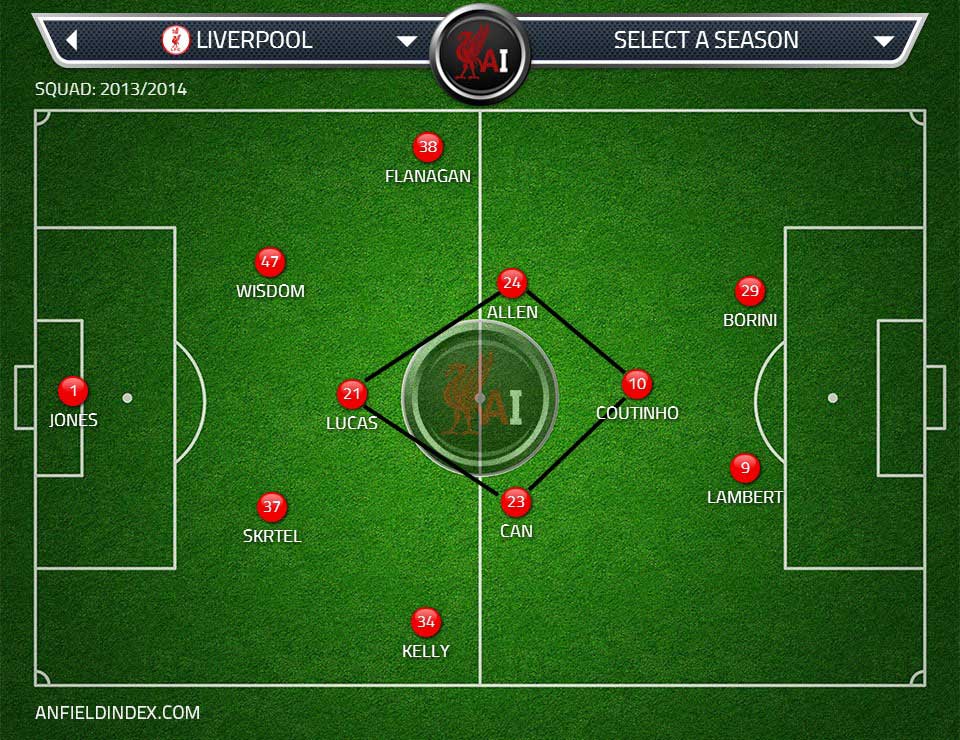 Diamond Teaser – We saw the diamond in action briefly against Preston, which suggests the formation is still in the manager’s plans.

Liverpool’s first game of their US tour saw them take on a strong AS Roma side at Fenway Park, Boston. The team lined up in the 4-3-3 formation, with the two centre backs looking to put out fires before they started on their respective sides. As one pressed forward, the other would wait to pick up any pieces.

Encouraging displays on one side of the defence came from left centre-back Sebastián Coates, and much-improved left full-back Jack Robinson. The pair will give the manager food for thought as he decides on squad places for both positions for the upcoming season, and in the case of Coates, confirm the theory that he’d be an excellent defender in the Italian Serie A!

The next friendly in the United States took place at Soldier Field in Chicago, where Liverpool faced Olympiacos in their first International Champions Cup game. The name of the tournament, and the teams taking part in it make it as close to the UEFA Champions League as you’re likely to get in a pre-season setting, with the air travel around America preparing the team for European away trips.

The competitive edge might not be present in all players at this stage of the football calendar (some can’t help it), but these games are a slight step up from traditional friendly. Considering Liverpool’s absence from European football last season, the whole package of this tour will remind some of the players what it’s like to travel around playing against well established European opposition.

In terms of tactics it was more of the same from Liverpool, and the addition of some World Cup returnees made the starting eleven look considerably stronger than in previous friendlies. Ashley Brewer covered the game for Anfield Index, and you can read his report here. 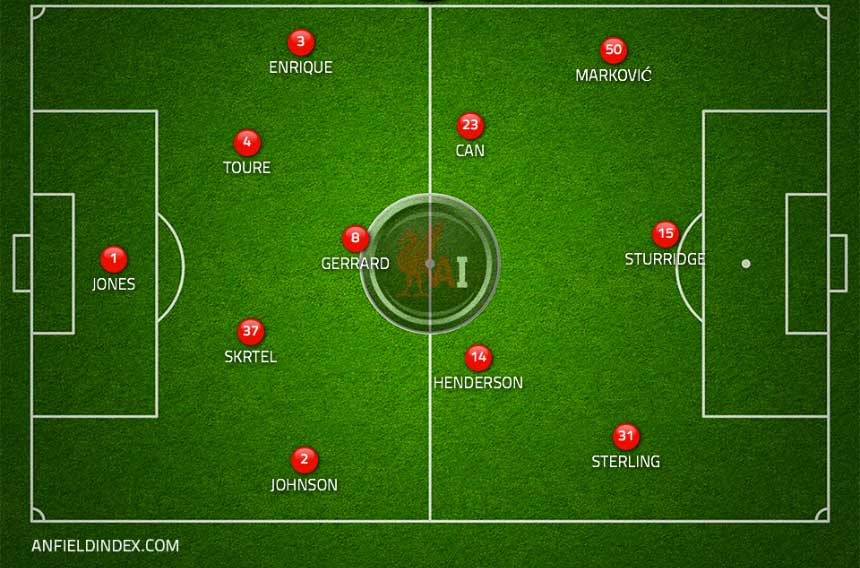 The familiar 4-3-3 contained several big names and a couple of exciting new signings, as Liverpool faced Olympiacos in Chicago.

In addition to Ashley’s review, it’s worth noting a few additional tactical points from this game.

Steven Gerrard dropped very deep at times, and was occasionally deeper than the centre backs when in possession. Martin Skrtel and Kolo Touré were drifting wide with full-backs running beyond the halfway line, dropping to receive the ball if required.

As well as this, the quick closing down of the opposition when Liverpool turned over possession was noticeable. Players risked giving away fouls with their aggressive closing down, but if the ball wasn’t won back within the first five seconds or so, they would drop back to cut off passing lanes. Daniel Sturridge especially was very effective when limiting the opposition centre back’s options on the ball, even if his closing down wasn’t what you’d call tireless.

You can keep up to date on the rest of Liverpool’s pre-season tour by listening to the Anfield Index podcast, or following the regular match reports and opinion pieces on the site.