In a genre dominated by shooters For Honor could potentially break the mould as the alpha has showed enough promise to keep my interest peaked. The genre of warfare games has been dominated by gaming dynasties such as COD, Battlefield and Halo but nothing has perfected the medieval sword and shield combat that would appeal to many. So let’s look at the game at that I feel could have a place for the famous phrase “FATALITY”.

Answer me a question, in a game have you ever wanted to garrote an enemy with a chain mace? Probably not, but you best get used to it as the brutal execution moves are the first thing that pop out on this game, they feel like the prize you’ve been grinding for as the gritty combat system makes the game feel like a real fight and a real struggle to out manoeuvre, out tactic and out play your opponent. 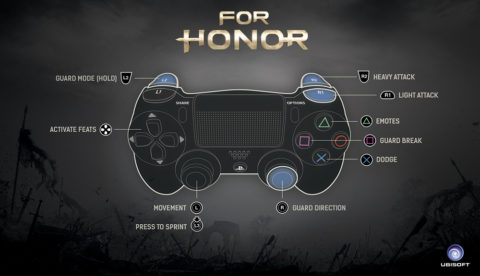 The combat system is really interesting as you use your right analog stick too ready your character to attack and defend from one of three positions (left, right, forward), then use either heavy or light attacks in combos to get around your opponent’s guard. There is also a guard break system which differs depending which character you are as some are throws, some sweep legs, this just brings another element to the combat. 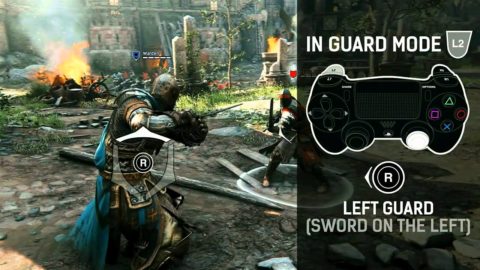 As you can see you enter guard mode, and the then the games begin as the old dance of sword and shield begins as you circle one another waiting to see who blinks first, of course it’s not as one paced as I am describing as there is a plethora of character choices which all have differing styles, so let’s break down each faction and character.

As it’s an alpha there are only 6 characters all together. As the guy on legendary show Deadliest Warrior says “Who is deadliest?”

So a good variation of character for different play styles, and obviously more to come on full release. The character customisation in the alpha is very impressive, as you gather upgrades for each individual character which changes your character aesthetically, but also changes the stats to compliment your play style. There is also a solely visual customisation as you can change colour schemes, but more impressively you can take influences from each faction’s culture and implement it onto your character, whether it’s tattoos for the Vikings, wood carvings for the Samurai, or armour moulding for the Knights.

In the For Honor alpha there are three game modes, 1v1, 2v2 and 4v4 obviously all have the need for different tactics, all very interesting. I believe the main game mode will be 4v4 as it gives you the ability to change your style of play on a more regular basis, as in the small team games you need a more balanced character. In the 4v4 game mode, known as dominion, you try to control the battlefield with 3 capture points A, B and C in a race to 1000 points, when a team reaches the 1000-point mark the opposing team loses the ability to respawn, then it’s all about your skill to survive and to try to regain advantage.  On full release there will be 5 game modes with 2 variations on 4v4 with elimination team death-match and then a regular team death-match. All game modes are available for PVP or Player vs AI, and there will also be a campaign on release.

As it’s only an alpha there are undoubtedly bad points about the game. Firstly, the ease to escape 1v1 combat is rather frustrating as it is near impossible to hit a moving target especially if you’re playing as one of the heavier characters. This is more an issue on dominion as the map is much larger thus meaning there is more space to escape into. In 1v1 game modes the map is much smaller and is easier to corner opponents. Fall damage is something I feel needs balancing as it can take nearly all your health for what would not be a fatal fall, I think this could be fixed by damaging max stamina and a little bit of health, this would perhaps fix the running away problem as people trying to escape would have less stamina thus making it easier to catch someone. On most maps there are points that you can fall of the map and die, which is obviously there for certain characters to use their throw ability to kill players, but in some situations these points can be very frustrating as you can accidentally fall as you come out of an execution animation which can be very annoying and unavoidable. I also feel they need to make things easier to access as with any combat game there are challenges to do, but to check your progress and said challenges you need to leave match-making. Most importantly for Britain it needs to be called “For Honour”.

For Honor could potentially be Ubisofts next big franchise as the possibilities are almost endless as you can go through all of history and pick a new faction to build around, if the story is as promising as the alpha is this game could become a cult classic as it is very unique. It’s actually not released until valentine’s day next year so if you’re looking to get your partner a present the sheer brutality of For Honor might be the one for them if he/she is a gamer.

On The Box: Discussing YOU

On The Box: Discussing Punisher S2

The 1Up Podcast: Winter Shooters