It’s that time of the year again. I take a look at Liverpool’s Premier League season from a statistical point of view. I did something similar for the 2014/15 season which you can find here although it’s doubtful many will want to relive that season it’s necessary as a point of reference. 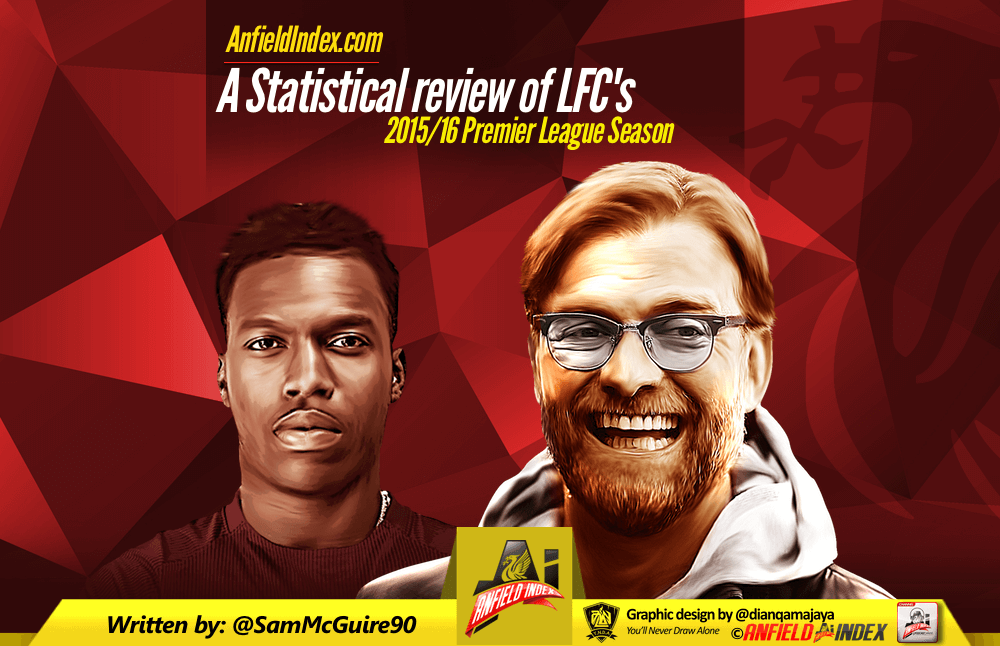 Liverpool’s league campaign didn’t pan out how many had envisaged. An eighth place finish, given just how poor the competition is, and a two point decrease in total points for the season isn’t acceptable for a team with our aspirations. However, context is needed and a comparison to last season adds to the sample.

Leicester and Southampton are the standouts in the last column with the former picking up over half the points on offer when they conceded two or more and the latter acquiring eleven of the thirty-six available.

The only other two teams to get into double digit points when 2+ conceded are West Ham and Liverpool. However, both of these teams conceded 2+ in more games than Leicester and Southampton meaning there were more points on offer. Last season Liverpool took 8 points from 39 available when 2+ conceded compared to 10 points from 45 this season.

Now the table above shows how many times a team scored 3+, conceded 3+ and how many points were won when 3+ were scored.

It’s a good way to judge just how hardened these teams are defensively – do they crumble when they’ve conceded a few goals?

First up, the games in which the top eight teams scored 3+. Spurs and City lead the way scoring 3+ in eleven games, one more than Leicester and two more than Arsenal, Southampton and Liverpool. A positive stat for the Reds, despite scored 2+ in only sixteen games they went on to score 3+ in nine games, quite the conversion rate when you compare it to Arsenal, who scored 2+ in twenty-two but only 3+ in nine. Being ruthless isn’t an issue for this Liverpool side, last season the team only scored 3+ five times.

The important one. Games in which the teams conceded 3+. Leicester and Spurs only crumbled once – Leicester against Arsenal in a 5-2 defeat and Spurs in the 5-1 defeat to Newcastle. Liverpool conceded 3+ in seven games, almost 50% of the time they conceded two they went on to concede three.  It’s an almost identical story to last season. The only difference being whereas last season Liverpool picked up zero points when 3+ were conceded this time around they earned four points.

What’s important to remember though is in the eight games Brendan Rodgers was in charge for this season his Liverpool side conceded 2+ three times but 3+ two times. You can’t help but assume Liverpool’s defensive record would’ve been worse this season under Rodgers had he stayed on.

United, Spurs, Leicester and Arsenal all had impressive defensive records this season conceding under 1 goal per game this season. Liverpool on the other hand once again conceded 50 goals, taking their average for goals conceded over the past four seasons to 48. Defence is still a problem.

A positive from this table is how when you remove the clean sheets Liverpool conceded 1.85 goals per game, a marked improvement on the 2 goals per game averaged last season. Less crumbly. However, the team also kept less clean sheets meaning they may need less goals to win these matches but they’re having to score in more games.

What’s noticeable from this is the fact Liverpool only picked up 36 points from the 60 on offer when facing teams who finished in the bottom half of the table, and only 11 from the 18 available against those who were relegated.  Talk about missed opportunities.

Liverpool haven’t really struggled against a particular type of team this season, they’ve just been inconsistent. More often than not it’s been individual errors as opposed to systematic failures that have cost Liverpool maximum points this season. Under Klopp the team does look better, they’re less fragile, they’re less brittle but if Liverpool are to build on this and really take advantage of the good the manager is doing then there needs to be upgrades on those susceptible to the brainfarts.

You can’t build an empire on broken breeze blocks.