Fenway Sports Group completed the takeover of Liverpool Football Club on the 15th of October 2010, after the disastrous ownership and mismanagement from Hicks and Gillett.  As my colleague has excellently wrote about Liverpool and its financial stature throughout the FSG era here, our annual net spend had declined from £40M in 2008 to -£8.6M in 2009/10 before FSG assumed control.  It was a disastrous situation for a club/business with a global brand like Liverpool to be in. 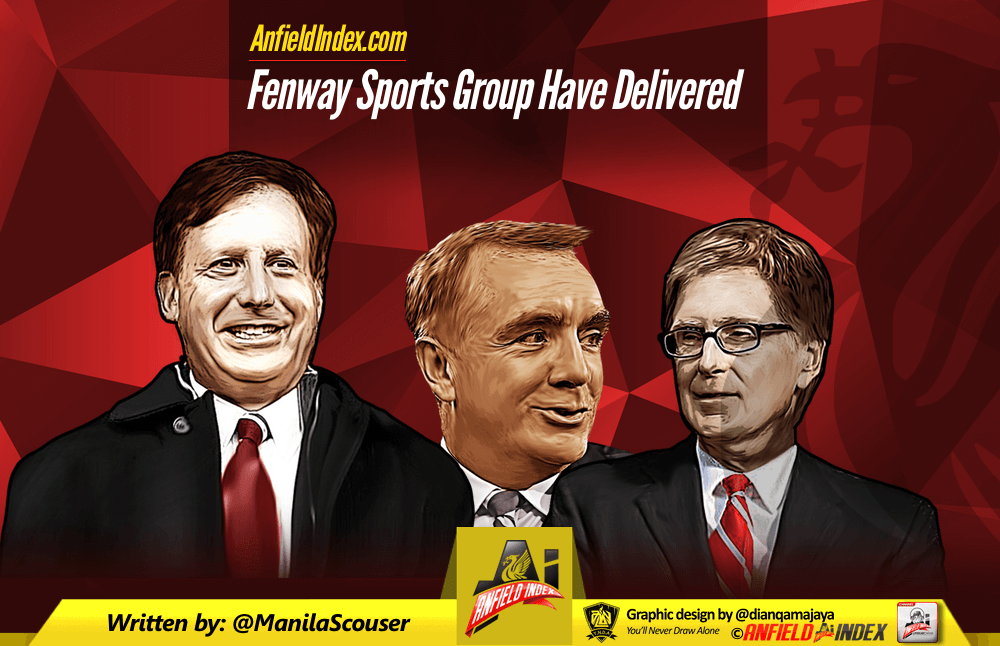 Since John W. Henry and the gang saved us from bankruptcy, the principal owner has released numerous press statements, and one where he promised the general public that we’d financially compete with Roman Abramovich and the ruler of Abu Dhabi, Sheikh Mansour in five years or less.  If I stop here, you could argue that they HAVE failed to deliver, but let me elaborate just a bit.

FSG have always reinvested what the club “makes” after every fiscal year while paying the bill that came with Liverpool when they bought it.  Slowly but surely, the ship sailed steadily over the years.

Including the debt of the former American owners’ holding company, Liverpool’s accounts dropped negatively to £400M in 2010.  Four years after the takeover, the Boston-based investment group (FSG) had reduced that in the area of £200M.

And in the previous season (2014/15), they’ve managed to turn the negative accounts into equity.  Furthermore, they’ve even invested an extra £49M into the expansion of the main stand, partnered with their endeavour to continually improve the talent and quality of the players on their payroll throughout their incumbent term.  Funny how that timeline coincides with the money they’ve shelled out just to cut ties with Brendan Rodgers and then appointing the big German shortly afterwards.

They’re starting to make money now.  When they brought in Klopp, they’ve shown, and even some have said it, that they mean business, and they’re not messing about any longer.

Even if I’m not an expert on how to efficiently run a business, it’s a pretty cut and dry situation at times.  If you have debt, you need to pay it off long before you attempt to expand.  That’s just common sense.  A company will never be in a position to grow when they are in debt.

Debt in the football world, especially what happened at Liverpool Football Club, who was in fact drowning in it, shouldn’t be spending net sales, but instead, pay off what you owe.

That’s not exactly what happened here.  The owners have sought to combine the process of paying the debt that came with the club while slowly improving on and off the pitch, which shows that they are, in fact, determined to bring success to us.  They have increased our sponsors, developed the main stand, and spent abundantly (although some of it wasn’t on the right players) in the transfer window.

This isn’t an article to tell you that we should not be in favour of selling Liverpool.  As I’ve said previously, if the circumstances are right for the football club and its fans, then by all means, let’s support it.  I would in fact be the first one to say we should. I firmly believe that some of us would like the club to be sold for all the wrong reasons, while forgetting the tradition and values the club and fans uphold, locally and internationally.

Liverpool haven’t failed on the pitch due to moneyball either, if some of you were wondering.  In my opinion, despite their “flawed” system in place or not, the club was not in any position to grant our deepest desires and bring in the biggest names in world football throughout their ownership, while the club was six feet below sea level in their accounts.

If you base your decision solely by the length of time John W. Henry has promised to financially compete with Chelsea and Manchester City, then yes, they have in fact, failed to deliver.

And of course, these types of statements should be fulfilled accordingly, especially from a guy with his stature. But haven’t we all been a bit late to work cause something happened during your commute? Or perhaps a bit too early cause there wasn’t any traffic?

Maybe their business model just needed more time than they assumed it would require when they came up with this five-year proposal.

When you deliberate all the factors, and examine their attempt to balance everything in reducing the liability of the football club whilst improving on the footballing side of it, you might see it differently.

So, all things considered, Fenway Sports Group has not failed to deliver. In reality, they’re currently beginning the process of delivering.

In the online shopping world, it could similarly be how Amazon or eBay might notify you when “your item has been dispatched and is now out for delivery.”