After the humbling of Barcelona last weekend many Liverpool fans thought the Reds would fly out of the traps against a weakened Arsenal side. What fans witnessed in those opening 45 minutes was the complete opposite. A dozy opening 45 minutes saw Arsenal mount attack after attack and look destined to take a 1-0 lead into the half-time break. Then Philippe Coutinho happened.  The Coutinho free-kick was the fright Liverpool desperately needed. It was the bucket of cold water being poured over a sunbather. 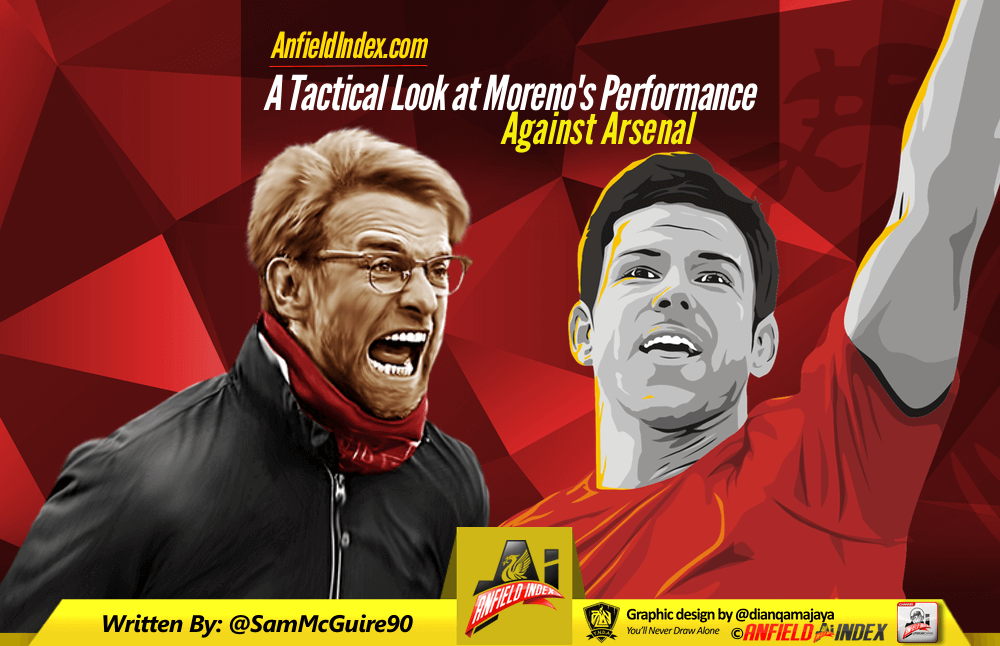 The shock to the system saw Liverpool fly out of the traps in the second half, score three quick fire, unanswered goals. And it could’ve been much more. Arsenal couldn’t cope with the the fluidity, the movement and the decisiveness of the attack. The victory was deserved for those 20 minutes alone.

You’d assume after such a whirlwind match that fans would be on a high. You’d be mistaken. Scanning social media on Sunday evening every other Tweet mentioned one player. No it wasn’t Philippe Coutinho after his brilliance. It was Alberto Moreno.

The full-back has a bullseye on his back after many, many brain farts. But the agenda against the Liverpool n0.18 is escalating at an alarming rate. The Spaniard could hold the door open for an elderly lady and some fans would still find a reason to criticise. He can’t do right for doing wrong.

Firstly, let’s address the penalty decision. He does touch the ball but the follow through probably warrants the penalty decision. If that’s any other player the majority of the fan base would say he was unfortunate to have the penalty awarded against him but because it’s Moreno he’s rash and brainless. They cite his earlier tackle on Ramsey in the area as evidence for his rashness, you know when he slid in and cleanly won the ball?

Next up is the Arsenal opener. This has been widely debated online. Some fans think Moreno is completely out of possession whereas others think the problem lies with the players behind Moreno not covering him. My take is Moreno has been unfairly blamed for the opener and here’s why.

The screenshots above show the lead-up to the opener. Liverpool reclaim the ball in midfield as Phil Coutinho, the left attacker popping up in central midfield, plays the ball to Adam Lallana. Before Moreno makes a move forward he looks around, possibly seeing if Liverpool had enough players back for him to push on down the left because at that moment in time Liverpool have nothing down that flank.

Wijnaldum, the man playing on the left of the midfield three, is tucked inside of Moreno which gives Liverpool five players to cover the four Arsenal players. Clyne on Iwobi, Lovren on Sanchez, Henderson looking at Ramsey and Klavan keeping tabs on Walcott. Instead of managing the situation Liverpool just become a shambles in defence.

Clyne is caught on his heels, Lovren squares up Iwobi from a whole 10 yards away and completely ignores Sanchez, Henderson tries to play Sanchez offside and Klavan has to cover Ramsey which then leaves Walcott completely free. Wijnaldum pushes into midfield to counter too, much like the Liverpool midfielder did against Barcelona and vacating the area he had.

As soon as Coutinho completes the pass to Lallana Liverpool are in an attacking transition. Klopp’s counter attacking game relies on taking these sorts of risks.

It’s down Clyne’s side so he’s going to be slightly withdrawn to be there as a passing option. Moreno is tasked with offering the width down the left and to open up the play centrally. If Lallana manages to avoid the tackle and plays the ball to Coutinho then Moreno, supporting the play down the left, will open play up for Coutinho. It’s his job to do that and he can’t be criticised for it.

It’s a Jurgen Klopp tactic. It’s not guesswork. In the narrow Liverpool side the width comes from the full-backs and it’s been highlighted in many pre-season games as well as the match against Arsenal.

In the two stills above it’s a similar scenario to the Arsenal opener but it’s been flipped. Liverpool are lucky to retain possession as Lallana’s pass bounces off Wijnaldum but Elney is unable to capitalise. Despite the ball not being properly under control you see Clyne making his way forward and into space. This time, because the play is on his side, Moreno holds his position. Liverpool have an overload of players down their left but nothing down the right as Mane has followed the play in field.

It’s all hypothetical but say Elneny does win the ball and looks to play the ball in behind Lovren and into the space Clyne has vacated, Lovren isn’t going to match Sanchez for pace and he’d be in on goal. Would people criticise Clyne for being presumptuous and pushing forward? 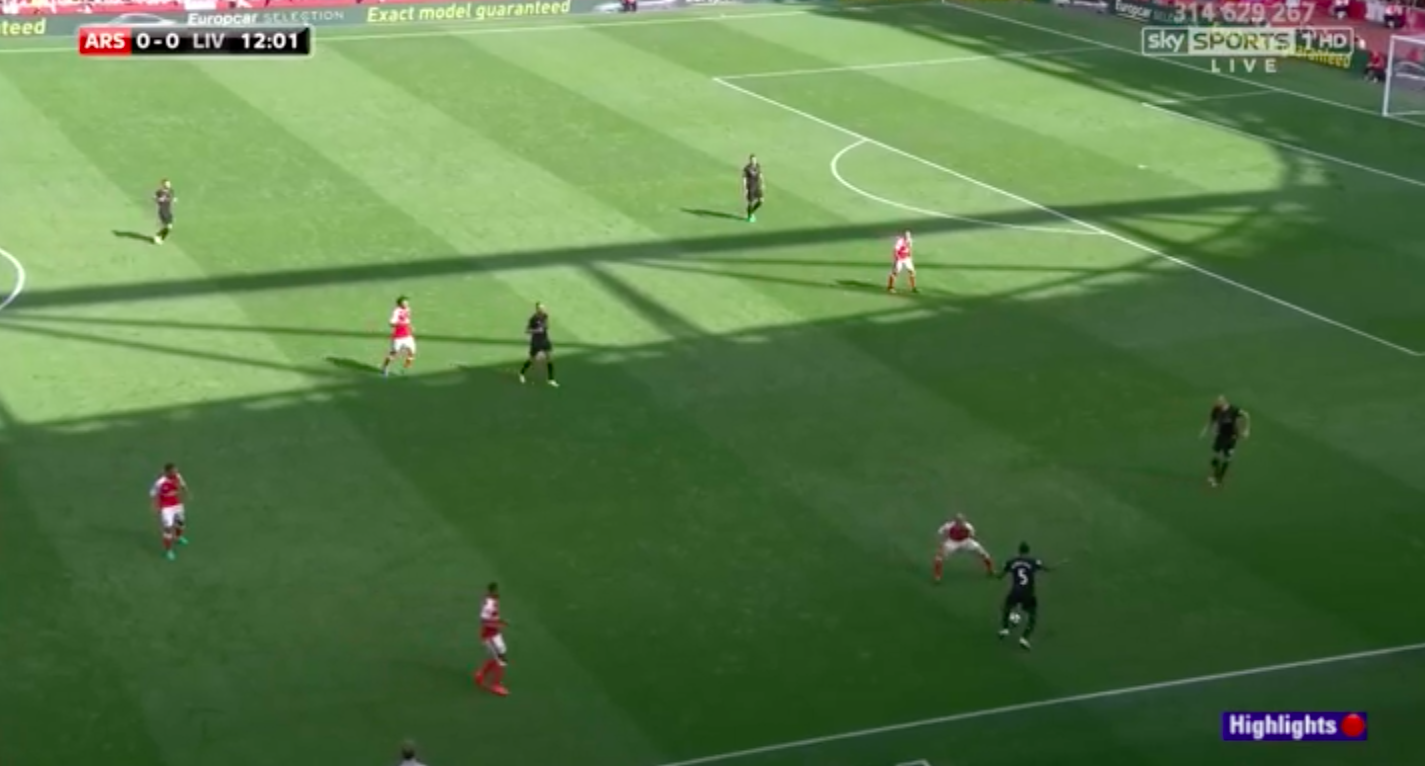 Another two stills. This time Liverpool look to build out from the back and play through the Arsenal press. In the first screenshot you can’t even see both full-backs despite Arsenal positioning their players well to cut the passes off. It’s only when Liverpool go long that the full-backs can be seen, both making their way back towards their own goal. Why aren’t fans going mad about the high full-backs in this instance when Arsenal are pressing so highly?  Are both Clyne and Moreno ‘out of position‘ or are they in fact where they should be?

The screenshot above is after Liverpool lost possession down their right and Arsenal quickly switch the play to Aaron Ramsey, who is on the ball in the picture, who then looks to play Oxlade Chamberlain in down the Arsenal left with Clyne way out of position. Fortunately for the Reds the pass is under hit and Lovren is able to clear the ball away. Had that been down Moreno’s side, Sky would’ve flagged it up no doubt.

You often hear the Moreno detractors state he does nothing offensively and that it’s all a myth. Yet in the series of screenshots above, taken just prior to the Lallana goal, you see just why Moreno’s presence in the final third helps open up space for the likes of Firmino, Coutinho and Wijnaldum, who all combine to create the Lallana goal.

In the first screenshot you can see Moreno, in the orange boots, position himself between Bellerin and Chambers. He then makes a dart to the left into the blindspot of Bellerin and Chambers is forced to follow before having to quickly readjust because Coutinho has made a move into not only the space between midfield and defence but the space that’s appeared between Holding and Chambers.

Firmino then picks the ball up and Moreno takes up a position hugging the left touchline and Bellerin follows. Wijnaldum then has the run, the momentum on the full-back and makes his way into the space that Bellerin going to Moreno and Chambers following Coutinho has created. Wijnaldum then casually cuts back onto his favoured right foot and picks out Lallana to put Liverpool 2-1 up.

There’s no mistaking that Moreno is partial to a brain fart but this witch hunt is getting beyond a joke. Sky mentioned nothing about Clyne allowing Oxlade-Chamberlain to cut inside onto his favoured right foot inside of the penalty area before firing home. It was Clyne who gave away the needless free-kick which lead to the Arsenal third goal. Coquelin was going nowhere yet Clyne blocked him off and allowed Arsenal a free cross into the penalty area. Some might even say rash and brainless?

This isn’t tit-for-tat but had Moreno done anything similar to that it would be the end of the world and people would be baying for his blood. Balance and a little common sense is needed. He’s not always out of position, a lot of the time is a consequence of the tactics used by the manager. He’s by no means the perfect left-back but he isn’t as bad as many make out. The full-back role is important to Klopp and if he didn’t see anything in Moreno he would’ve been first out of the door this summer.