Believe it or not, Adam Lallana’s turnaround in form hasn’t gone down well with some people. Scan social media and you’ll see squabbles between people with Lallana being the antagonist. The crux of it all comes down to Lallana’s miraculous upturn in terms of output.

So far this season the Liverpool number 20 has 7 goals and 6 assists. Even more impressive when you consider the fact he’s starting in a more withdrawn role than what people usually associate with Lallana. He’s influencing the game both offensively and defensively and the impact he’s having is there for all to see. He’s breaking up attacks, he’s doubling up with his full-back to support them, he’s starting attacks and finishing them off. At this very moment in time, given how the transfer market is, £25 million would be a bargain for this version of Adam Lallana, whose output now matches his performances.

Here I wrote about how a rejuvenated Lallana was key to Klopp’s new look Liverpool side. I had no issue saying he turned me from doubter to believer.

People can argue he’s always been this influential but without the output to match it’s irrelevant in what’s quickly become a stats based game. Teams need goals and assists from all over the pitch and if your attacking midfielder, which Lallana was at the time, isn’t delivering then it’s rightly an issue. 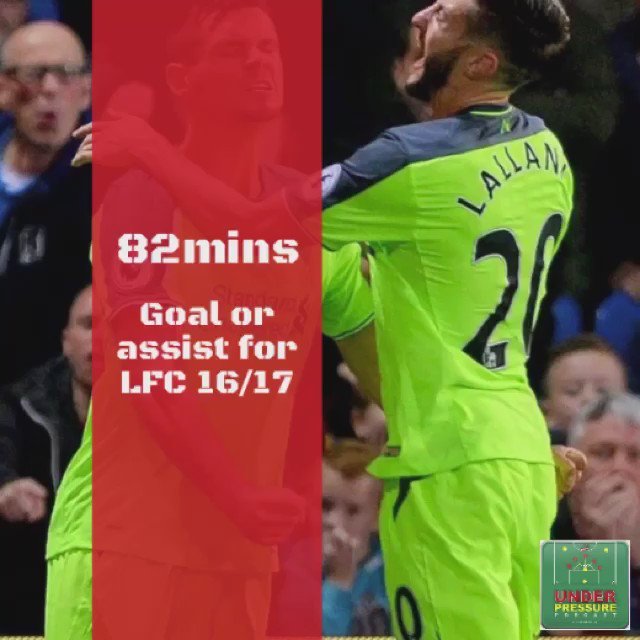 So, to the Lallana debate. There’s a refusal to believe that at the age of 28 a player can take his game to a whole other level, like Lallana has. There’s doubt over whether this form is sustainable or whether it’s just a flash in the pan. Both are fair opinions but there are no immediate answers. If his form eventually peters out then so be it but patiently waiting for what you think is going to happen, instead of actually enjoying it, is pointless. We’re now in the middle of December and his performances don’t seem to be slowing up. His form is nothing but a positive because, even if he does revert back to 14/15 Lallana, Klopp now knows the profile he needs for a particular midfielder in his system to flourish. It’s a win-win both short and long-term.

There’s also a bit of resentment mixed with anger thrown in there for good measure for some.

Why did it take so long for Lallana to start putting in these performances? Why didn’t he perform like this in his original position? Why have I got people on Twitter saying I know nothing because I said I’d sell original Lallana, the one who went a year without scoring a Premier League goal? Why aren’t I allowed to like Lallana 2.0? Why is a person tweeting me preaching patience while at the same time having #KariusOut as their username?

While on the surface these people are arguing about Lallana, what it really comes down to his self preservation on social media. Like it or not, if you’re involved with the footballing side of twitter you want your opinion to be respected because it’s not a fun experience if people are taking the piss out of you. One outlandish claim and you have no leg to stand on because people on social media are relentless. There are superiority complexes all over the show. This isn’t news though. It’s human nature.

It’s our egos that prevent the majority of us from holding our hands up and saying “Shit, yeah, didn’t see that coming“. Instead people dig their heels in and wait for moments to prove how right they were. Nobody ever wants to admit they were wrong but always want to claim they were right. That’s why you have people retweeting their own tweets from 2013 these days.

Lallana is the poster boy. He’s the victim of all of this. Those who backed him from the off are now claiming they were always right and those who didn’t rate him are claiming to be right because initially he failed to impress. What you get is a toxic Twitter and civil war.

Until people let go of this whole “I’m right and you’re wrong” mentality, Klopp’s attempts to turn doubters into believers, which he set out to do in his first press conference, will fall at the final hurdle as fans aren’t fully embracing what the German is doing here. Which is disappointing really, because you don’t have to like Lallana to be able to acknowledge the transformation under Klopp.

“Can’t wait to be positive under Jurgen y’know. Instead of being a Death Eater I’m going to look forward to the footie again. Wait a minute, you want me to what? Praise Lallana? Nope. No chance. I made my bed in 2015 and I’m lying in it now. I’ll just bide my time and retweet my old tweets slating him whenever he has a mare. That’ll do me just fine.” – Someone, probably.

What’s even more frustrating though is the fact there are signs it’s happening. That the Liverpool fan base are slowly turning from cynics to exceedingly optimistic,  Now, whenever anybody is linked with a move to Liverpool there’s no meltdown. Instead of mass hysteria, lots of rants and even more swearing, people say something along the lines of – “you know what, I’ll reserve judgement on him till Klopp’s got hold of him. Just look at what he did with Lallana”. That’s Lallana’s Liverpool legacy to date. But some people still stop themselves short of actually admitting he’s managed to change their mind on him.