We live in fast times – a lot of things nowadays happen instantly. People have gotten used to that so much that it is easy to lose sight of the bigger picture and over react to some events. In the world of football every time a team doesn’t win, it’s a catastrophe – have a bad month and there will be fractions of fans calling for the manager to get sacked. If a 22 year old player is inconsistent and has stretches of matches where he has limited or bad impact, people will say that the guy is a waste of space – just ask Divock Origi or Emre Can. Liverpool supporters seem to have forgotten “The Liverpool Way”. Success is a combination of talent, discipline, hard work and continuity. The last time LFC really had a long term plan was when Rafa Benitez was appointed manager. Let’s have a trip down memory lane and examine how Rafa managed to build a title contending and possibly the best all around Liverpool squad in the last 20 years and compare that to what Jurgen Klopp is trying to do now.

Rafa Benitez inherited a team that had finished the previous season in 4th place, 15 points behind 3rd placed Manchester United and 30 points from champions Arsenal. The team conceded just 37 goals in 03/04 and had the best centre back pairing in the last 20 years in Hyypia and Carragher, a great defensive midfielder in Hamman and a young Steven Gerrard about to enter his prime. Improvement was needed in attack as the team only scored 55 goals in the last season with Gerard Houllier. The league at this point was very top heavy with only five Premier League clubs, Manchester United, Arsenal, Liverpool, Chelsea and Newcastle, in the top 50 in the UEFA club rankings (Leeds were 16th but got relegated).

Rafa Benitez had the benefit of having a summer transfer window when he was put in charge. During his first transfer window the club brought in Xabi Alonso, Djibril Cisse, Luis Garcia. Only 4 players left the club. Liverpool struggled in the league, losing 14 matches and finishing with 58 points – 2 less than the previous season. But in the end nobody cared about the league because we won the Champions League for the 5th time in arguably the best final of all time. Having Big Ears back home made Rafa an instant legend and bought him the most precious thing a football manager can ask – time. 58 points is the second worst total point tally since 2003/2004.

In his second season Rafa Benitez cleared the deadwood – 8 first team players were sold or released. 9 first team signings were made with the notable Jose Reina, Daniel Agger, Momo Sissoko and Peter Crouch. The work of the Spaniard was becoming more and more apparent and the team finished 3rd with 82 points, conceding just 25 goals and winning the FA cup in the Steven Gerrad final. In my opinion the team overachieved that season.

The summer of 2006 was a busy one. Rafa was looking for more attacking options – Dirk Kuyt, Craig Bellamy and Jermaine Pennant arrived at Atfield. Alvaro Arbeloa was signed in the winter transfer window while Javier Mascherano arrived on loan. The clear-out continued as 11 players first team players left. After what at the time was considered an unsuccessful campaign the team finished 3rd with 68 points, conceding just 27 goals.

At this point – 3 full seasons in Benitez had the core of the team build. An incredible defense that with one of the best midfield threes in the world in front of them. While the team had problems scoring goals sometimes the Spaniards defense was one of the hardest to breakdown. Rafa had also won 2 cups and lost a Champions League final while in the process of building a contender.

The final pieces of a title contending team were brought in the summer of 2007 – Fernando Torres and Ryan Babel were bought to fix the attacking inconsistency in the squad while Javier Mascherano’s move became permanent. Martin Skrtel and Lucas arrived at Anfield to provide the squad depth at critical positions. Liverpool looked ready to challenge for the title. It was not to be as the Reds finished 4th with 76 points after drawing 13 times.

Then came the 2008/2009 season. Liverpool were favourites to win the league in the begging of season. Too many draws cost us the title.86 points is the highest the team has achieved in recent times.

It took Rafa 4 full years and tens of transfers to build a team capable of competing for the league title. The club waited for the right players to be available at the right time. Winning trophies early was key for him because the supporters new that the man in charge is a winner. The graph below shows an almost linear progression after the Spaniards second season: 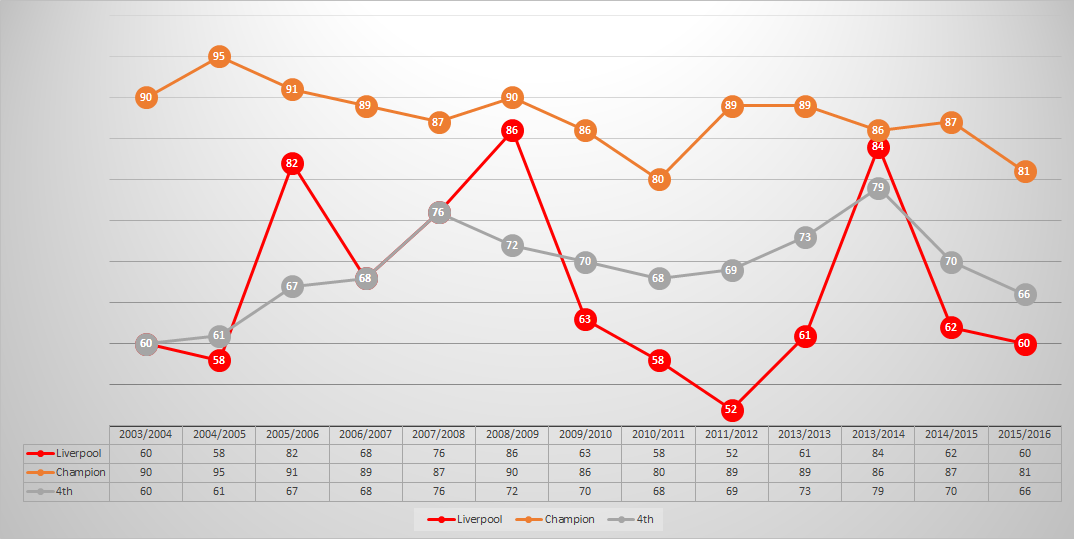 Jurgen Klopp was appointed Liverpool manager when we were 10th in the League and struggling for points even in the Europa League group stage. The team had been performing below par for over a season.  While the German couldn’t turn our league fortunes around (in part due to focusing on the cup runs) he got us to two cup finals – losing both. That is the big difference between him and Rafa Benitez. Klopp has failed to deliver a trophy in his first two seasons – and ultimately that’s how the supporters judge a season. Having that in mind it is import to not lose perspective. Benitez inherited a team that had cup winners and a solid core – specially in defense. Klopp found a squad without identity, that was struggling (and still is) on defense.  Back in the middle of the last decade there was only one sugar daddy football club – the gap between the top 4 and all other teams was bigger. Fast forward 10 years and now there are 6 clubs fighting for the champions league places.

All you need is patience

Klopp famously said that he wants to turn doubters to believers, fully realizing that it may take a lot of time. It is easy to be a doubter after a loss and a bad performance, after yet another set piece goals at the Anfield Road end. But we should not lose belief and sight of the big picture – the team has improved A LOT. No matter what happens from here to the end of the campaign this is already our second best season points wise since 2008/2009. We have a brilliant manager and a good young squad. It’s been almost a decade since fans could look into the next season and realistically expect the team to challenge for trophies.. Hopefully this is a start of the journey that will take us to the promise land.

P.S Congrats on the promotion Rafa