With an epic two-legged quarter-final looming against Manchester City, I took a look at the way both teams attack. The Champions League tie promises to be one of those contests for the ages. Two brave, attacking teams locking horns; this could be another legendary European contest that, we as fans, will be talking about for years to come.

We know we can beat City. However, it is also true that we are facing the (inevitably) greatest champions of the Premier League era. Certainly one of, if not the best, league sides to ever grace the English top tier.

All the same, the evidence suggests that Man City have lucked out a bit this season. The gap is almost certainly much closer between Liverpool and City than the league table suggests. Attacking-wise the Reds are not far off City at all, as I showed here. Defensive and midfield upgrades this summer should bridge the gap further.

However, what cannot be disputed is that Guardiola has once again shown his ability to weave his managerial genius and succeed in a foreign league. People will argue that he has spent a fortune. Guardiola has, but he also has the tactical nous to maximise the performance of the players at his disposal. It’s a dynamic combination, culminating in setting new levels of performance-consistency in the Premier League.

Jurgen Klopp is also doing a fine job but his league campaign has been handicapped to different degrees by inferior buying power, atrocious refereeing performances and an imperfect (albeit improved) defence. “Too many draws” has been this season’s mantra.

Looking at the pending European games, what works in Liverpool’s favour is that Man City’s style, as devastating as it can be, is also ready-made for Liverpool if Klopp nails his tactics. The stats (sourced from Understat.com and only reflecting league form) show us where Klopp might focus on nullifying City and where his own team might thrive.

What the numbers say

Having analysed the data, the shot profiles and shot locations of the two teams are very similar. Analysing goals by location (City’s graph first), there is very little difference between the two teams. 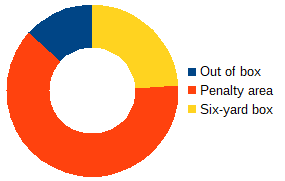 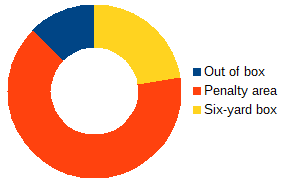 However, City have a higher chance of scoring from a shot in the six-yard box than Liverpool. The graphs below show xG per shot, that is, the likelihood of a goal with a shot in the specified area/zone. A lot of City’s goals in the six-yard box come from the chaos caused by numerical overloads against the opposition defenders. A high proportion of these goals result from low cut-backs and easy tap-ins. 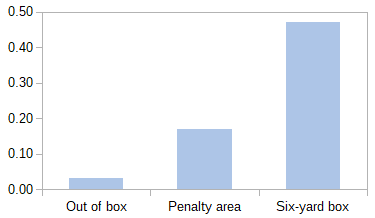 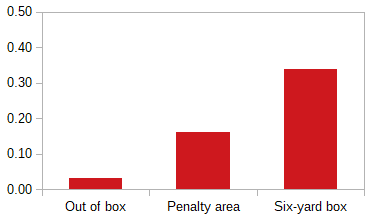 What we can see is that when the game is played at a slower pace, City have more control. Their patient and effective passing style works for them at a slower tempo; their performance is more sustainable, as they can pace themselves and let the ball do the work for them.

On the other hand, Liverpool prosper through organised chaos. A faster game with plenty of space to attack results in better xG per shot. But this has more of a physical toll as LFC are more reliant on their off-the-ball work, rather than on-the-ball quality. 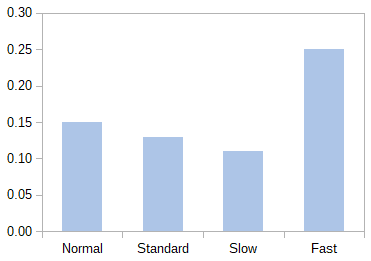 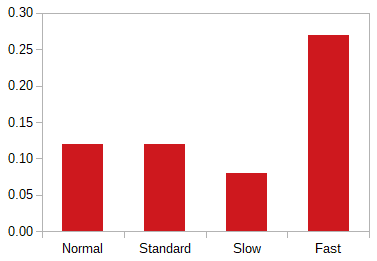 City are a threat and both teams’ strengths lie in scoring goals. Both teams are vulnerable at the back and we have the pressing and attacking quality to cause them serious problems. City will also be under more pressure, with the tag of Champions’ League favourites a heavy burden around their necks. They have the class and composure on the ball to wear us down and pick us off.

With an aggregate league score of 8-4 in City’s favour, Klopp’s team has to be on its A-game. This tie is also interspersed with key league games. I think Klopp has to keep the tie down to a low-scoring affair, even if it means toning down his own “heavy metal approach”.

However, when all is said and done, our fab 3 are tremendous. They are absolutely firing right now and Mo Salah gets better and better. With that kind of quality, we’ve got a very good chance of progressing to the semis.