So the Champions League draw’s been completed in Monaco, and Liverpool know who they have to beat to progress. Everyone knows, but to reiterate it’s Napoli, Salzburg, and Genk. Easy, right? Nothing’s ever easy, and Liverpool can’t underestimate anyone. It could have been a lot worse, though.

The Reds are around 7/1 with most bookies to go all the way and lift a seventh title in Istanbul in May. Shop around before backing Klopp’s men as you might get a better price at one bookmaker compared to another. Some betting sites accept PayPal too, so if you bet using an e-wallet to keep your bank statements clean, choose one that has PayPal as an option.

On paper, every fan assumes Liverpool will top the group but is it as simple as that? Let’s look at how the fixtures stack up when mixed in with Premier League matches before and after. 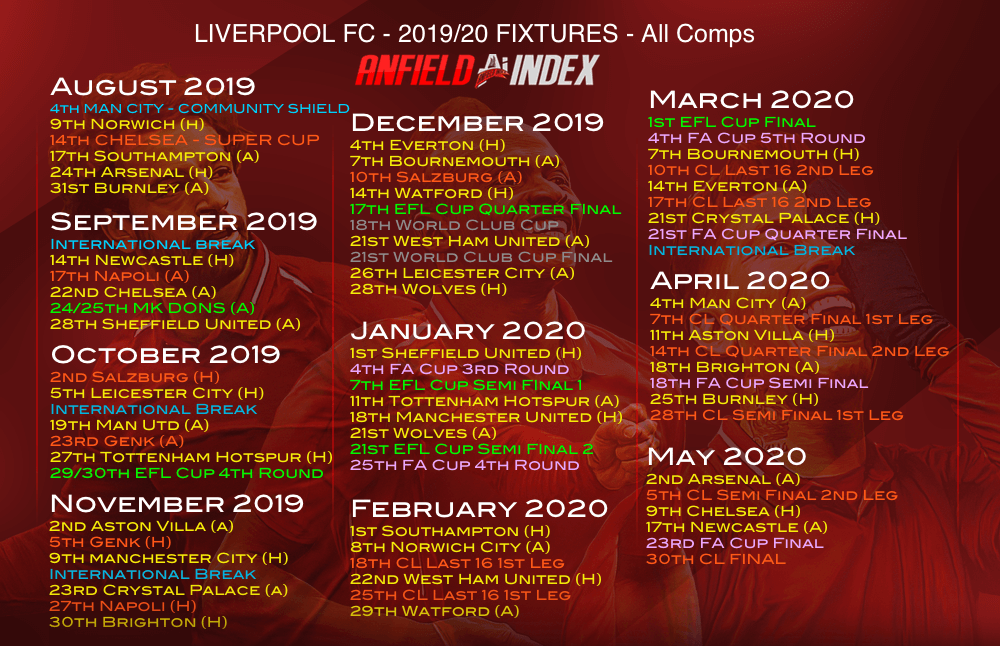 The first few fixtures look ok in all honesty, which is good news in terms of fitness. It’s Newcastle at 12.30 on Saturday and then Napoli away on a Tuesday night followed by Chelsea away on Sunday at 16:30. Naples isn’t too far away, so the timeframes are pretty good here, and let’s not forget that Chelsea are in the same boat so there’s no advantage for either side heading into that one. Salzburg at home is sandwiched in between Sheffield United away and Leicester at home, so that looks ok too.

The first fixture that looks like it could cause issues is Genk away on Wednesday. Liverpool are at Old Trafford on Sunday at 16:30 to play Manchester United, and it’s Spurs on the Sunday after Genk. That’s three tough games in the space of a week. Klopp’s only hope here is that he wins his first two Champions League games and has the luxury of resting a few players against Genk.

The second Genk game is on Tuesday in between Villa away on Saturday at 15:00 and Manchester City the following Saturday evening at 15:00. Again, pretty favourable for the Reds.

Napoli are next up at home, and that’s in between Palace and Brighton, so Klopp should have no issues there. Liverpool will be hoping they’ve already topped the group by the last game, but it’s Salzburg away on Tuesday at 17:55 after playing Bournemouth away on Saturday at 15:00. A trip to the Vitality is never easy, although that might not apply to Liverpool as they thumped the Cherries 4-0 in the same fixture last season. Watford travel to Anfield on the following Saturday at 15:00.

You don’t get anything in football without working hard. And that’s certainly what Liverpool need to do in order to top the group. What some fans are concerned about, however, is whether the Reds have enough strength in depth to fight on all fronts this season.

Daniel Sturridge has gone. Danny Ings left last year on loan but completed his move this summer. Alberto Moreno has signed for Villarreal, and Harry Wilson is out on loan at Bournemouth. Apart from Adrian replacing the departed Mignolet, you can argue that Liverpool haven’t replaced anyone else. What happens in Robertson and Origi get injured? Who replaces Robbo at left-back and who replaces Origi as cover for the front three? Milner and Brewster? Let’s hope Liverpool don’t suffer too many injuries.

Looking at everything and the Champions League fixtures mixed in with the Premier League fixtures, Liverpool should be ok until the knockout stages. What Jurgen Klopp must consider is signing one or two bodies in the January transfer window. There will be injuries along the way, that’s almost guaranteed every season. But what Liverpool need to hope is that those injuries don’t happen to any of their star players. If Van Dijk gets injured for a prolonged period of time, do you really hold out much hope of them winning a trophy this season with Matip and Gomez? Joel Matip has started the season well in fairness.

If Klopp strengthens in January, Liverpool have a fantastic chance of multiple trophies. If the squad stays the same, it could come back to bite them later on in the season when fatigue sets in and the fixtures pile up.