*The stats in this article are gathered manually from Squawka. Minutes include stoppage time. Offensive, Defensive and Net rating are the totals per 100 minutes.

It’s silly season yet again. A lot has been made of Liverpool’s transfer dealings and the Virgil van Dijk saga in particular. And while without a doubt the Dutchman will improve our current squad (check out the scouting report by Alex Barilaro) he has become a sort of a messiah for some supporters. Naby Keita is seen as a box to box monster, that will help put an end to our poor defensive record. The Reds’ defensive struggles over the last 7 seasons have been well documented – LFC has failed to concede fewer than 40 goals in every season since 2009/2010, while conceding 50 in 2013/2014 and 2015/2016.

All the way through last season Jurgen Klopp insisted that there was an improvement in the way we defend. And to be fair to him the team did concede 8 fewer goals than in the German’s first season. With that in mind the same old problems continued to torture our defence and make fans fume over the inability of the team to stop the leakage – set pieces, dumb back passes, failed clearances, mental and positional mistakes… you name it. But something changed at the end of the season. LFC finished the year with 5 cleans sheets out of the last 6 matches and managed to hold on to the 4th spot that was seemingly slipping away.

So where does this all come from? The answer is simple – line up selection. The Liverpool squad and especially the defence has been plagued with injures ever since Jurgen Klopp took control at Anfield. In the winter of 2015 we had to loan in Steven Caulker in order to be able to even have enough centre-backs in the squad. Last season our starting pair in the heart of the defence was Dejan Lovren and Joel Matip, who started together in only 18 league games. The squad didn’t really have a third choice central defender once the whole Sakho saga unfolded, Ragnar Klavan was brought to be fourth choice. Furthermore the manager put his faith in Alberto Moreno last summer and was let down leading to a right winger playing the majority of minutes at left-back. The starting goalie was changed a twice in the first quarter of the season. The whole state of our defence was a mess from day one of the season. And yet in all the chaos the team managed to improve defensively by 8 goals compared to previous year.

The two faces of the Liverpool defence

For the purpose of this piece I will not look at our goalkeepers and full-backs. The situation in those positions is pretty clear and I think there is a consensus among fans. We need a left-back. Trent Alexander-Arnold and Nathaniel Clyne are good enough to carry the load at right-back. The goalie situation is not ideal but supporters don’t mind seeing Simon Mignolet between the sticks anymore and very few people have given up on Loris Karius. Other than a few mistakes by Karius those positions last season were solid in open play, without providing anything spectacular. Set piece defending was a problem for the team as a whole so it’s not fair to single anyone out. With that out of the way, what about our centre-backs? 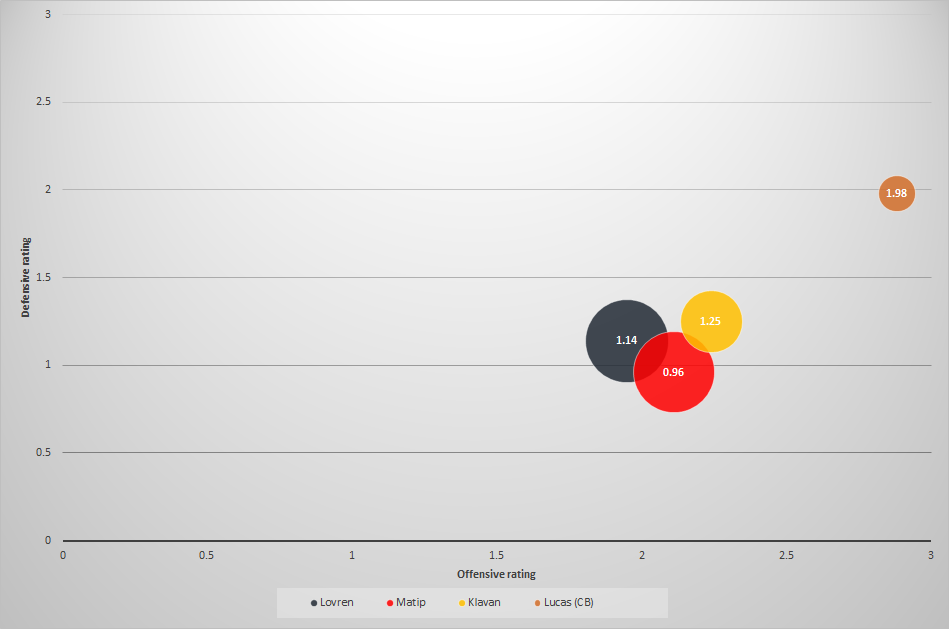 A few things jump out from the way the team performed when the different centre-backs were on the pitch:

The picture becomes clearer if we have a look at the different centre-back pair used by Jurgen Klopp last season:

Note that when three at the back were used this leads to duplicate goals scored/conceded for the different pairs. For example Joshua King’s equalizer in the 2-2 draw with Bournemouth is recorded as conceded against the pairs Lovren and Matip, Lovren and Klavan, Matip and Klavan since all three of them were on the pitch at that time.

There is a huge drop off in defensive rating for all centre-back pairs that are not Lovren and Matip. In fact if the team managed to maintain a 0.83 defensive rating we would have finished with the third best defence in the league behind Spurs and Manchester United. Pairs that include Lucas are not surprisingly very bad.

This table truly illustrates the two faces of the Reds’ defence. The team conceded 14 more goals in 277 when Matip or Lovren not playing. Thankfully at least one of them was on the pitch in every minute of the season. The results of the team when our fist choice centre-backs are starting just highlights the importance of having them available as much as possible. In 18 matches they started LFC’s record is W11, D6, L1 (39 points) with the loss being 1-2 at Anfield against Crystal Palace. Given the problems we had breaking down buses the draws should bot be attributed entirely to the defence. Four of those 18 fixtures were against top 6 teams and one against Everton. Seven of the teams twelve clean sheets came in those games. And of course the two of them produced this brilliant moment summing up what it is like to be a Liverpool supporter these days:

For comparison David Luiz and Gary Cahill started 33 matches together for Chelsea, Toby Alderweireld and Jan Vertonghen 25 for Spurs, Laurent Koscielny and Shkodran Mustafi 23 for Arsenal (and conceded two more goals the LFC). Man City also had a lot of injury problems  with their centre-backs and had Pep Guardiola had to start Alexandar Kolarov in the middle of the defence in some fixtures. It is safe to say the City did not have a good season defensively. I couldn’t really derive which defenders are considered starters for the other team from Manchester, partly because they also had a lot of injuries, partly because their manager rotated the squad because of their involvement in Europe. Mourinho’s team still conceded the second least goals in the league. But the style played at all Old Trafford is not something we want to see regularly played at Anfield so the difference in that department is understandable.

To answer the question from the title – no Liverpool’s defence is not as bad as supporters and pundits make it out to be. In fact when the first choice players are available the the Reds are very close to the best in the league. That of course doesn’t mean that improvement is not necessary. But even if the Van Dijk deal doesn’t come to fruition we will be alright, as long as the central defender that comes in is at least at Lovren’s or Sakho’s level. For a lot of people that is probably a low bar but even such a player will improve the squad enough for us concede less than a goal per game for the first time in 7 seasons.